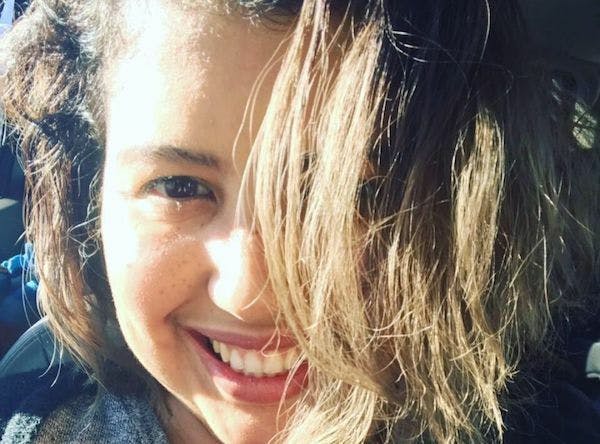 The little thumps of his plump feet on the hardwood floor thunder towards me like a tiny elephant and I can feel the smile taking over my face. My mini me has woken up from his little nest on the couch where he was surrounded by fuzzy blankets and his favorite stuffed animal. I could see the tousle of black curls matted at the back of his head as he makes his way around the living room, searching for me, his mama.

I let out a soft laugh as I think about my husband’s pleas to cut the curls off. “We need to at least cut the curls for summer, he keeps getting food in them.”

But he’s my child in every way possible and I know the mats in the back of his hair aren’t just from the food that his little toddler hands like to smoosh into his roots like a deep conditioner. Our hair is thin, wavy, but plentiful and no matter the amount of brushing- it will always knot. Half the time it's a beautiful mess, and the other half, it’s Pantene commercial perfect.

My mother knew all about that.

“This munchkin looks just like you. Cute, but you should really try some product.” My mom texted me earlier that day after I sent her a few pictures of the good hair day he was having. “Your eldest son looks more like your hubby though.”

Sometimes it was still hard talking to her ... especially after finding out about my adoption.

She never knew how to handle my hair and would try everything under the sun, including Vaseline to tame the “mess on my head.” Her hair had always been straight, black and slick, contrasted against her pale skin that only darkened in the summer. She didn’t get how important it was for both of my sons to look like me, because she had always been surrounded by people that looked like her.

She had three sisters and they all looked like one another. I had never experienced that when I was a child. My brother who was adopted, too, looked vaguely like me. But I never shared the same eyes, ears, nose, like she did with her family.

But as I looked down at my little babes that were now tumbling around the living room playing, I felt the power of my family, of our culture in our house… things were different. Cartoons were played in Spanish, walls were painted vibrant colors, and above all my children would grow up knowing where they came from. They would grow up with the power of celebrating their culture with their mother and father, and each other. And they would never have to question their identities like I did.

The scene in front of me almost brought tears to my eyes, until I noticed a bit of smooshed banana sticking in between waves on the back of mini’s head. My husband may have been a little more right than I cared to agree, and it seemed like we were going to get some haircuts today. Glancing around at both faces and chubby bodies that looked like me - it made me a little less nervous. They were still my babies even without curls. I was there in their eyes, ears, chin, and shape of their nose.

We were a familia, and they were both my little Columbianos.