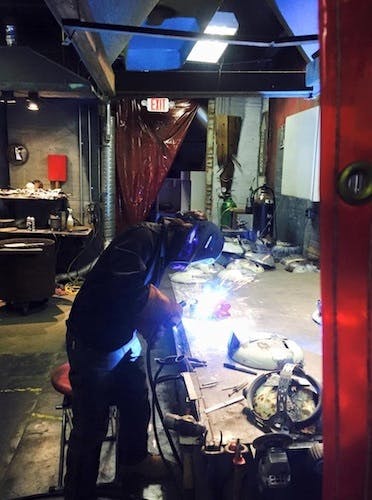 “We’ll meet you in the parking lot,” my son texted me.

I stood at the post office, keeping my eyes open for the large green pickup my son told me was “the kind of truck I want when I get my license.”

They pulled in, laughing, my son’s smile wide with the kind of REAL laugh he reserved for the people he trusted.
​
I looked at them, shrugging with a quizzical look as if to say, “what’s so funny?” They doubled over in laughter again, sharing a moment that was not meant for THE MOM. They stepped out of the truck, each of them in dirty Carhartt work pants and big steel-toed boots. Kamil’s long dreads were tucked into a hat, but my son’s silky dark hair was as it always is after a day of welding — long, hanging in his face, sweaty and greasy from hours inside a helmet.

They lifted my son’s latest project from the back of the truck, a heavy steel table made using a combination of welding techniques and Shou Sugi Ban, a Japanese wood burning method.

It was just another day for my son, a homeschooled Korean-American boy being raised by white parents, mentored by a black man.

When my son was in school, from preschool through 6th grade, his educators were white women. All of them. While he had kids of color in his classes, and we sought out mentors who reflected back at him what he saw when he looked in the mirror, he never had “that person,” the one who makes the difference.

My son is enthusiastic and energetic and passionate about the things that matter to him, and equally passionate about NOT doing the things that don’t matter to him. It was a complicated fit for an education system often dedicated to passive intake of knowledge, one that frequently didn’t seem relevant to a kid who wanted to build and create and explore.

When we made the decision to start homeschooling him, it was after years of our child feeling frustrated and unheard, as if his life was not his own. He wanted to be doing and making and solving the learning puzzles he created for himself.

When he wanted to learn metal work, we found Kamil, and the relationship grew from there. It wasn’t a conscious thought to seek out a man of color, but it would be false to say I wasn’t delighted that my son would benefit from that aspect of their relationship.

The fact that Kamil has forged what might appear to be a non-traditional path through the world is important, perhaps more important than my son realizes right now. Now, he learns from a man who made choices about what to study and learn and sought a life where his passions could be intertwined with his work. Kamil is black, not Asian American, but in so many important ways he DOES reflect back at our son what he sees in himself.

There are the practical elements like my son learning what it means to bid on a project or budget for materials, and there is the science and math, the chemistry and physics necessary in welding. But there’s something more. There is my son and Kamil walking through the world together, my son away from his white parents, the way he will exist in the world forever as an Asian American man.

My son claims that it doesn’t matter to him, but I notice subtle differences now that he is getting older and more willing to talk about race and ethnicity with his parents without rolling his eyes and saying “that is SO boring to me!”

It’s little moments rather than a long conversation, but it happens more often that it used to. Recently, he and I walked through the grocery store and he pointed out the sign for the segregated “Asian” foods section, an organizational system we’ve lamented since he was little because of the ways it perpetuates otherness.

“There’s nothing for white people here, Mommy,” he joked with me. “Sorry! No food for you!”

Not long ago, he picked up a package of tacky, cheap spoons labeled “Oriental,” written in a terrible font meant to look vaguely “Asian.”

We laughed at the awful stereotyping of the packaging and I asked “how have you possibly managed all of these years?”

“Well,” he replied, with feigned seriousness, “I’ve had to adapt.”

At that moment, he was joking, but it’s true. As the transracially adopted child of white parents, he has had to adapt in so many ways. All too often the world views him through a certain lens simply because of the way he looks. His lived experience is different than that of his parents, and while he is starting to talk with us about it he also needs people who can help show him how to make his way through a world that privileges whiteness as normative and nonwhites as “other.”

I don’t think that my son and Kamil talk about race all that much. Or maybe they do. It’s not my business to know because it’s important that my son have that space without his father and me. And I know that there are things my son learns about being a strong man of color from just spending time with Kamil.

The fact that my child is Asian American, being mentored by a black man, surely makes their relationship rare, but I don’t know how rare. What I know for sure is that when they go to Sullivan’s Metals to buy supplies, they are, to all who see them, both builders and makers and creators, belly laughing together because of a relationship built on trust and affection and respect for what each brings to the table.
​
And if that means I have to be left out of the joke, well, that’s just as it should be.

Sydne is a distance swimmer and teacher. She lives with her partner and son in Massachusetts. More about Sydne >