Her name is Niranjana 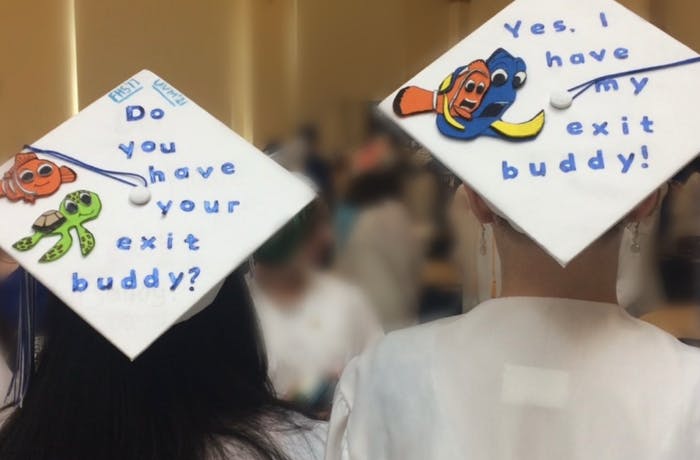 EmbraceRace · Her Name is Niranjana by Meaghan Davis

I met my best friend in the sixth grade. Her name is Niranjana.

We reached a new level of friendship when we were locker buddies in the seventh grade. Which is the equivalent of college roommates when you're in middle school. We decorated our locker like the walls of a dorm room, fueling all of our inside jokes. We were the only two girls in homeroom, so our giggles got us into trouble most days. Especially when I would play jokes on my gullible friends saying things like, "Look, there's a giraffe outside the window." And she would look, gasp and burst into laughter. Our friendship is quirky like this. It's also full of some of the best friend stuff we all dream of. The stuff from the movies.

On my 13th birthday, Niranjana convinced her math class to make oversize birthday cards to tape my locker. And during our final week of high school, she drove me to graduation rehearsals. Pulling up in front of my house at 7:00 AM, a morning person and I'm not, with Bruno Mars playing from their speakers of her dad's silver SUV. And inside, her ponytail bounced with her dance moves. At our high school graduation we wore matching graduation caps. We decorated them at my house with the characters from Finding Nemo. Hers said, "Do you have your exit buddy?" And mine said, "Yes, I have my exit buddy." We were all excited because we were supposed to sit next to each other at the ceremony. But, with our luck, she was at the end of one row and I was at the beginning of the next. But we just laughed it off. We always do.

In the early days of our friendship, we played Guess How to Spell My Name quite a bit. My name has two sneaky extra letters, M-E-A-G-H-A-N, but her name was always harder for people to figure out. We also played games when it came to substitute teachers. We took bets on which sub. would butcher her name the worst.

In the early days of our friendship, we played Guess How to Spell My Name quite a bit. My name has two sneaky extra letters ... but her name was always harder for people to figure out. We also played games when it came to substitute teachers. We took bets on which sub. would butcher her name the worst.

There was one time in computer lab in the seventh grade, an older woman made her way down the class list. And then she paused. Niranjana sat up in her chair, perfect posture, and we watched her closely. She pursed her lips to one side, tilted her head and furrowed her silver eyebrows. "Nuh-niran-ha," she uttered, shaking her head. She looked up at my friend and she was the only brown student in the class. The only one who fit the Indian name. Niranjana just corrected her with a forced smile and a nervous chuckle. "Niranjana." I bit back a smile, and I said, "Here" when she read my name next. And then I turned to my best friend and mocked the substitute by saying, "Naranja? Isn't that Spanish for 'orange'?" We giggled, and I called her "Naranja" for awhile, "Spanish for orange." But it was different this time.

As time went on, she seemed to lose interest in these games. We weren't in as many classes together. And when we were, I seemed to be alone when it came to laughing at the creative attempts of substitutes to pronounce her name. And somewhere along the way the Guess How to Spell My Name game just turned into me quizzing my peers, "Hey, guess how to spell Niranjana?" Like her name was my only party trick.

As time went on ... I seemed to be alone when it came to laughing at the creative attempts of substitutes to pronounce her name. And somewhere along the way the Guess How to Spell My Name game just turned into me quizzing my peers, "Hey, guess how to spell Niranjana?" Like her name was my only party trick.

I used to tell my grandma about my best friend Niranjana all the time, too. And she tried to stumble her way through Niranjana a few times before she gave up and told my mom on the phone, "I can't pronounce that. I'm just going to call her a Reggie." And when I saw Niranjana again, I told her about this new nickname. And she got all excited because she's never had a nickname before. So I left out my grandmother's frustrations with pronouncing her actual name, leaving it at, "Reggie's just easier for her to pronounce." And she liked that.

The nickname caught on. I started calling her Reggie in school. Friends picked up on this, and she told everybody, "It's my nickname. Meaghan's grandma gave it to me." Like she was so proud. And then everyone called her Reggie, too. Every time we made plans, they weren't just plans. They were Meg and Reg adventures. Asking if she wanted a ride to her job interview was appropriately followed by, "Oh my gosh. Meg and Reg adventure." Which was Niranjana's way of saying, "Yes".

And this interview got her a job with me at a concert venue one summer, in college, working in concessions. I was the stand leader and she was my delivery girl for the VIP boxes. And our supervisor printed the stand assignment sheet with "Reggie" for every show. So naturally, everybody called her by her nickname. And we didn't have visible name tags to tell anybody otherwise. I didn't realize they thought her name was "Reggie" until our supervisor called out sick one night. Someone else was in charge of the assignment sheet and wrote "Niranjana", instead of "Reggie". I caught on to the not-so-subtle whispers of coworkers who stared at the sheet and wondered aloud who this new person was. Trying to pronounce the name like it was some complex tongue twister. It was like middle school all over again, as they flocked around the piece of paper, pinned to the wall, uttering sounds the way that our substitute teachers used to.

"It's actually not that hard. It sounds the way it's spelled. It's Niranjana. N-I-R-A-N-J-A-N-A. It's actually a beautiful Indian name. Did you seriously think her name was actually Reggie?"

So I asked Niranjana to count the inventory in my walk-in cooler, to kind of get her away from the crowd of people. And then I hissed at them, "Niranjana is Reggie." That prompted a few drawn out, "Oh"s and "I feel stupid"s. And one guy asks, "Can we still call her Reggie?" "Of course," I assured him. Because it would be weird if they just started calling her Niranjana out of the blue. Another guy joked, "Anything's better than that." And he gestured to her name on the stand sheet. And I remembered the look on the substitute teachers face when she called Niranjana "orange" in Spanish. The way she puckered her lips to one side and scrunched up her nose. The look of disapproval. A look of disgust. I bit my tongue for a moment before beginning my lecture. "It's actually not that hard. It sounds the way it's spelled. It's Niranjana. N-I-R-A-N-J-A-N-A. It's actually a beautiful Indian name. Did you seriously think her name was actually Reggie?"

And with a shake of my head, I had moved on from the conversation and began counting my cash drawer. I could still feel their stares. "You guys need to put out menus," I instructed without eye contact, hoping to disband the crowd of eyes on me and her name. Now when my coworkers asked about Reggie I tell them, "You mean Niranjana? She's doing well, actually." And I try in every conversation to avoid letting her nickname slip from my lips. And I know a simple correction will never make up for lost allyship. For whitewashing her name. For not really considering her entire identity for so many years. But it's a start.

Meaghan Davis is a recent graduate of Westfield State University with a BA in English. In addition to being a writer, she is an Educational Support Professional in a special education program for social-emotional learners in a Massachusetts middle school. More about Meaghan > 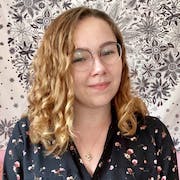