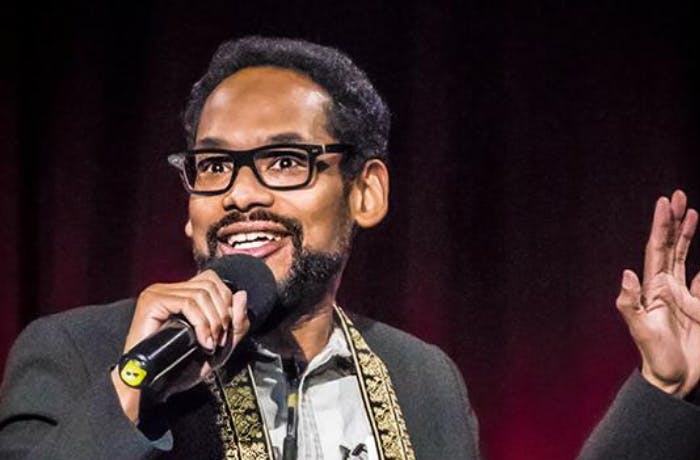 So there's this saying that gets tossed around by people from all over the political spectrum that goes, "You're entitled to your own opinion, but you're not entitled to your own facts." And it's pithy. It has a ring of truth of about it. I get why it's popular, even valuable. But when it comes to humans, I'm not really sure how true it actually is, because one plus one might always equal two, but that's math. Humans live in the world. And the world is messy.

I think about this a lot when I think about my current good friend and ex-girlfriend, Jenna. She's wonderful. We dated for a while a few years back. And we're still very much friends, but we ended up wanting different things and went our separate ways on that front. But Jenna is and remains wonderful in that she's intelligent, and clever, and an amazing listener. And we really bonded in a special way.

And if you couldn't tell by the name, Jenna, she is White and I am not. And though I am a Black man who grew up in Boston, I did go to an Irish Catholic college. I grew up in a predominantly White suburb. I worked at a Boston tech startup for many, many years. So interracial dating, not a new frontier for me. And there are a lot of things that go into that. And if you're a person of color and your partner is White, it's very important that they one, be obviously not racist. But, well beyond that, it's important that they be what we, in the modern parlance, call "woke," meaning that they understand their privilege. And they take the time to really sort of check themselves and examine things from your perspective, and really put the time into that relationship on that front. And Jenna was great like that.

[I]f you're a person of color and your partner is White, it's very important that they, one, be obviously not racist. But, well beyond that, it's important that they be what we, in the modern parlance, call "woke," meaning that they understand their privilege.

We used to have these fantastic, long, expansive conversations about our backgrounds and our experiences of race. And we were very different. She came from Florida. And way back in the day, a small side of her family had actually been slave owners. I came from Massachusetts. My family had fought in the 54th colored regiment in the Civil War. So it was this whole thing. And it was just fantastic. We used to have these great talks. But it wasn't all like midnight philosophy sessions. We liked to have fun. We really liked to party. We were both into the same music. And one time, a few years ago, we decided to go see The Weeknd at TD Bank North Garden. Weeknd, a very popular artist. This is before the super bowl. He was still big then, but not as big. So we're hyped. We're going to go to this great concert. We're both excited for it. And like I said, we liked to party. So we're both going to pre-game this.

So we're drinking and whatever and I just decided, let's take this to the next level. I'm going to go ahead and get a weed cookie. So we did that. And I have a little bit more experience of that than Jenna, so I'm like, "Here's what's going to happen. I'll break this up. I'm going to have half. You have a quarter now. Wait, see how it hits you. If you're feeling it later on, you have the other quarter. If not, whatever." And so we go off to this show and it is amazing. It's packed. The energy in TD Bank North Garden is just off the charts. Everybody is dressed to the nines, either wearing the best clothes in their closet, or the least clothes that it's legally allowed to wear in public. The vibe is cool. The opening act is amazing. And people are really into it. I know I'm into it, because I hate small talk with strangers, but I'm dancing. I'm talking to the people next to me like, "Great show, right?" All that stuff. So we're into it.

This goes on for a few hours. Everybody's feeling great. And then the show ends and immediately the energy in the arena changes. You know how it is, when the concert ends, lights go up, harsh lights. You got 20,000 people, crowd crushing to get out of the exits and it's just a lot. There's a lot of people. There's a lot of noise. We don't have the music to vibe to anymore. And it starts hitting Jenna not great. She starts to feel a little nauseous, a little woozy. And I'm like, "I've been there before. I know exactly what she's going through. I'm not worried." I'm like, "She just needs to lay down and maybe puke. It's going to be fine. But we need to get out of here and get home first." So I'm like, "There's a million people out here for blocks, and blocks, and blocks. There's no way we're going to get a car right here." So I'm like, "Let's walk up a couple blocks. I'll call a Lyft. We'll get there then. And that'll be fine."

So we do exactly that. We get into the Lyft and the entire ride home she just has her head on my lap and she's coming in and out, but I know she's going to be fine. I take her back to my place in Somerville, which is a town just outside of Boston. And my neighborhood, I like it, but it's kind of nosy neighbors. And where I particularly live, is like a cul-de-sac. And it's like a horseshoe shape. And everything's like a theater. If you look out your window, you can see pretty much anything going on, on the street. And I've often seen my neighbors before peeking out of the blinds or whatever, if they're bored. Not a whole lot going on.

So I'm like, "All right, let's just get her upstairs." And I'm walking up to my apartment. And I think she's right behind me. But after a few steps, I realized, no, not at all. Jenna has actually taken a knee and she's now dry heaving on the sidewalk in front of my driveway. And I see that and I just get hit with raw, animal fear, like terror, like prehistoric caveman, saber-toothed tiger coming around the corner, because now, what does this look like? I am now in the position of being a Black man, trying to get a clearly drunk and drugged White girl up into my apartment. This is a bad look. I'm just speeding through all the possible ways that this could go sideways. I mean, what's the worst case scenario? The worst case scenario here is I get shot by the cops. I mean, it's Somerville. As far as cops goes, they're relatively chill. But it's America, too.

It's on the table, right? What else could happen? A couple bro dudes can come around the corner and be like, "Yeah, are you okay, ma'am?" She's not in a position to be talking for herself. This is a very bad situation that needs to be handled immediately. So I get down on one knee. And I'm rubbing her back. I'm like, "Hey, babe, can we just sort of get upstairs? Is that going to..." And she looks at me and just gives me the straight devil eyes, because in her mind, the way she's looking at this, I am just being some asshole boyfriend who can't even take two seconds to sit down, rub her back, get her some water, just chill and let her get herself together. She's not seeing any of the fear that I'm dealing with. And it's really just churning in me right now. And I think about what do I do? Do I just be polite? I'm like, "No. I'm not trying to get shot tonight."

So I get up real close. I look her dead in the eye. I'm like, "Hey, babe, I know you're feeling real bad right now, but from a racial perspective, this situation here looks real bad for me. So if you can walk, I need you to get up and walk right now." And she immediately, on a dime, comprehended. She got up, marched up those stairs like a soldier, just shot right up. I'm like, "Yeah, that is why I date that girl! Way to go!"

A central fact of my life is that I've lived it as a Black man in America. And Jenna hasn't. So there we were, face to face, staring into each other's eyes in the same moment, in the same place and light-years apart.

And I think about that moment so much now, like years later, because the two of us were there, were fully inhabiting the same place, the same time, having had just shared the same exact experience, but in a radically different way. On the surface level, you might think that we were working with the same "facts," right? But again, we're humans. We don't live like that. We don't live in math. We live in the world. And life experience and the emotions and observations wrapped up in that are central. And a central fact of my life is that I've lived it as a Black man in America. And Jenna hasn't. So there we were, face to face, staring into each other's eyes in the same moment, in the same place and light-years apart.

And when I think about where we are as a country today, and where we've kind of always been, to be honest, when I see someone with a certain hat, or a bumper sticker, or a profile picture, and I know with certainty who they voted for, the kind of ideas that are about to come out of their mouth or whatever, and I can't begin to comprehend thinking like that or believing in what they believe. Instead of immediately sinking into anger or fear, even if they are justified, and they often are, I first try to ask myself, "What are they seeing? What am I not seeing?" Because I think it's fundamental that no one is the villain in their own story. Everybody is doing whatever they're doing, because they think it's right. Their life has led them there. And I don't have any answers for what I see on a daily basis, but if we can just start with recognizing that everybody's human and they've all got here some different way, maybe it's a start.

Wes Hazard is a standup comic, storyteller, actor and writer. He is also a 3X Jeopardy champion. Learn more about Wes at weshazard.com. More about Wes > 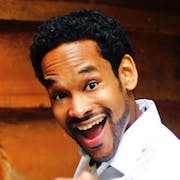