For the love of mangoes

An immigrant kid learns it's safer to hide her mango-love 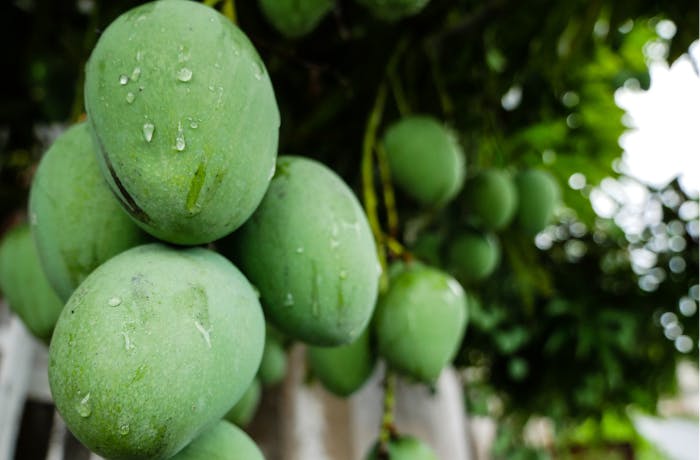 EmbraceRace · For the love of mangoes by Khama Ennis

There are few pleasures in life that match the satisfaction of eating a perfect mango - sweet juicy, firm, but tender. It may be different for some to imagine a time when a mango smoothie was not available to order at every other juice bar, coffee shop or boba tea joint. I don't have to imagine it though. All I have to do is remember.

When I was a kid growing up in the eighties and nineties as a Jamaican immigrant in a predominantly White Philadelphia suburb, finding a really good mango usually meant waiting for the next family trip to Jamaica and hoping that mangoes were in season.

It was worth the wait though. Having a bad version would've been worse than none at all. Every now and then my parents would find a nice looking mango close to home, and we'd all watch it ripen, and just hope that it lived up to our expectations.

[W]hen I was a kid growing up in the eighties and nineties, finding a really good mango usually meant waiting for the next family trip to Jamaica and hoping that mangoes were in season. It was worth the wait though.

By the time I was a teen mangoes were more readily available, but they still weren't as popular or as well known as they are now. Even still, it seemed like a safe way to introduce some of my White American high school friends to one of my favorite foods. If nothing else, compared to explaining the wonders of things like oxtail, curry, goat, ackee and salt fish. All I had to say by way of explanation was that it's free. I almost thought of it as the gateway food.

One afternoon, two of my friends were at my house, which was a rare event in and of itself. My home was the strict house where old school Jamaica rules of decorum, manners and respect for one's elder's reign supreme. It just wasn't as much fun to be there as it was to hang out elsewhere. In any case, there happened to be a perfectly ripe mango in the kitchen and I got really excited. I offered to share it with my friends, since they never had one. I couldn't imagine anyone not loving that sweet tangy goodness, paired with a buttery smooth texture. Plus since it was their first go round, I figured I wouldn't have to fight anyone to gnaw the remnants off the pit, which would've been guaranteed if my sister had been around. I gave it a gentle squeeze. It was firm but soft enough to give just a little and the scent at the stem was delicious. I peeled it sparing as much of the fruit as possible because I'd been in the US long enough and was Americanized enough at that point that scraping the fruit from the peel was no longer my thing.

Then I cut it into the flesh. It was so soft and the knife was so sharp that I got all the way into and through the pit, which is when everything fell apart. I hadn't before seen the inside of a pit. Which, for the record is not a pretty sight. It's gnarly and strange. It took me a minute to realize what had happened. My friends saw my face and then looked at the fruit and the disgust registered on their faces with a quickness. I tried to recover and cut some tasty pit free pieces, but when each of them took a bite, the texture threw them off. They found it slimy where I found it fleshy. The flavor was so unlike anything they'd had before, it just didn't go well. The moment had passed.

[My friends] found it slimy where I found it fleshy. The flavor was so unlike anything they'd had before, it just didn't go well.

It was probably right around then that I took that part of my identity and tucked it away for safekeeping, ready to come out at family gatherings or other scenarios where it was safe to fully bliss out on all things Jamaican: reggae, patois, and food that was either beyond savory or impossibly sweet. Food is and was such an important part of how I connected the place and culture that has informed so much of how I see the world.

I was a toddler when my family came to the US and when I speak, there's no trace of the Jamaican accent that would otherwise clarify my origins. Unless, I tell someone there's no obvious sign of that connection, but when I see a spread of Jamaican food laid out, there is no doubt about where I'm from.

Mangoes are everywhere now in smoothies, grocery stores, restaurants, and probably in some of your homes. It's hard to wrap my head around the before times, but the memory is visceral and never far from the surface.

My kids both love mangoes, but my younger daughter will throw down for a good one. I don't remember where she had her first one, but it was probably the real deal because I still can't bring myself to buy mangoes that look pretty, but smell like cardboard. There's no magic there. 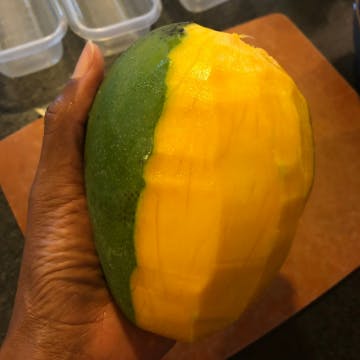 One of my aunts has a tree in her backyard in Florida, and I don't know what she puts in the soil. Maybe she prays over it, who knows! But the mangoes that that tree bears are as big as a child's head and as tasty as it will ever get in the US. The fruit comes midsummer and if my parents are coming for a visit during that time of year, my mom's carry-on bag is mostly mangoes. If there's no visit, a mystery package arrives sometime in July. I debate for the slightest fraction of the second, whether or not to share it with my kids but then I remember that my mango loving daughter is not afraid to draw blood. So, I take them out of hiding and we watch them ripen over the next few days.

The pleasure that both of my kids experience eating mangoes is eclipsed by my own, when I watch them enjoy something that is so special to me. One of my younger daughter's friends came over this summer and was around to share one of the mangoes. She loved it. It wasn't new to her, it wasn't special to her, it wasn't foreign to her. And what's more is that my daughter fully showed that side of herself without hesitation, apology, or even a thought that it may have been strange or new to her friend. They went off and left me with the mess to clean up, as kids are wont to do, but I wasn't even mad. I ate my share thinking of that day so long ago and while I finished the pit, I was so glad I had brought my whole self to the table.

Khama Ennis is the mother of two bright, spirited and courageous girls. She is also a writer and an emergency physician practicing in Western Massachusetts. More about Khama > 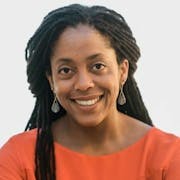