Teens Lead The Fight Against Columbus Day in Their State

By Student Advocates for Change (SAFC) in Amherst, MA 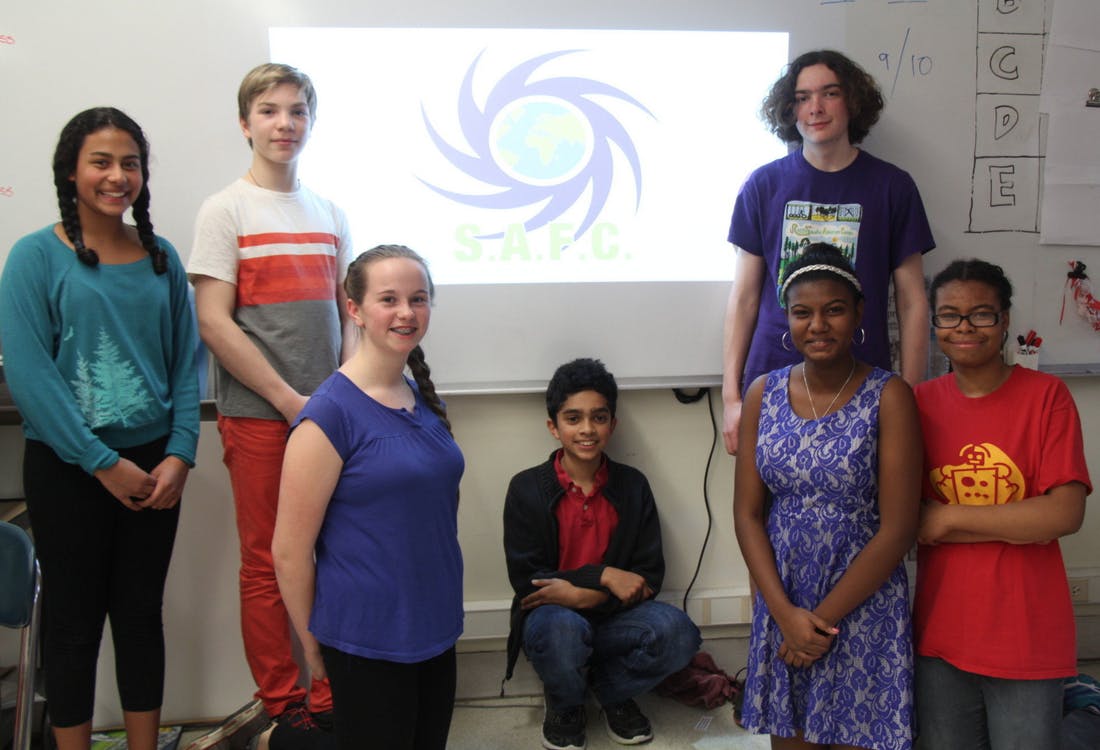 In our society there are idols and heroes who we look up to, and they influence our lives every day whether or not we are conscious of their impact.

We often are taught that these people are perfect, but when we take a closer look we find astonishing information that changes the way we see them. For instance, there are towns whose names pay tribute to Lord Jeffrey Amherst, who in the eyes of many was an intelligent and resourceful war hero.

The truth however is that he was a cruel man who distributed blankets containing smallpox to the Indigenous people that were living in the area, thus massacring this group of people. Lord Jeffrey Amherst is not the only “hero” people look up to without knowing the true nature of their deeds.

Christopher Columbus is one of these heroes. He has been idolized by the general public, making him out to be a heroic explorer that discovered America. Similar to Lord Jeffery Amherst, when we look deeper into Columbus’ story we learn new truths.

His journeys led to acts of human trafficking and genocide which greatly outweigh his positive impacts. Our group, the Student Advocates for Change, has been working to change the name of Columbus Day to Indigenous Peoples Day in Massachusetts. 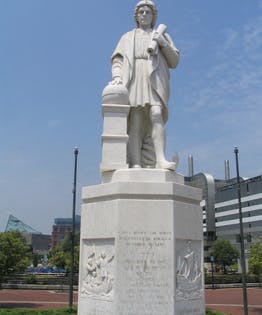 Christopher Columbus, as we typically view him. This statue of Columbus is located in downtown Baltimore halfway between the Inner Harbor and Little Italy. Photo credit-Brent Moore.

Our main inspiration for changing the name of Columbus day was a social studies unit in eighth grade in which we learned about Columbus.

In this unit we read passages from journals by Columbus and his crew. We also compared interpretations of Columbus’ actions from Howard Zinn and Samuel Eliot Morison. What we discovered about Columbus’ actions shocked and disturbed us.

Our group, the Student Advocates for Change, was formed with the intent of changing the name of Columbus Day in our town, Amherst, Massachusetts.

Using our research from class we made presentations to the Human Rights Commission and, after a few meetings, earned their support. During this time we also worked to raise public awareness by handing out informational flyers at a local farmer’s market and giving presentations to local activist groups.

After gaining the support of the Human Rights Commission, we wrote a warrant article to take to Amherst town meeting that would officially change the name of Columbus Day to Indigenous Peoples Day in Amherst, Massachusetts. On May 18th we reached our goal.​ 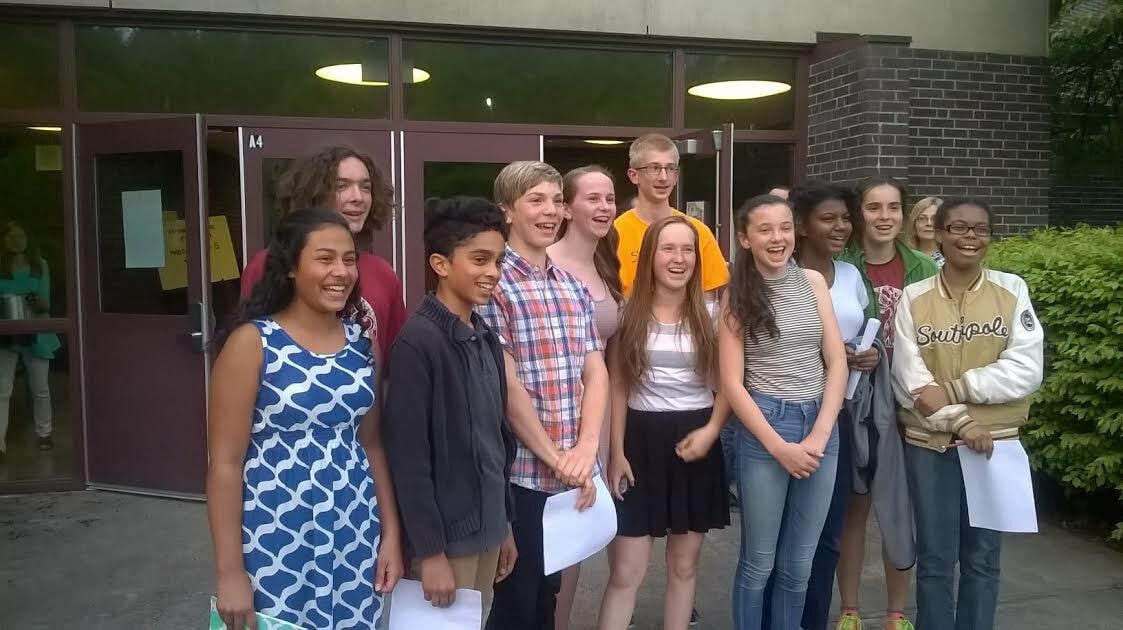 This is us outside Amherst Regional Middle School on May 18th, minutes after changing the name of Columbus Day to Indigenous Peoples Day.

We have met with the State Representative Solomon Goldstein Rose to discuss the process of writing and passing a bill, and we will now begin to create a bill that will change the name of this holiday. The intent of this bill is to make the second Monday of October known as Indigenous Peoples Day instead of Columbus day.

We hope that by changing the name of this holiday we can raise awareness about the sufferings of indigenous peoples, and we can use this holiday as a time to educate students about the history of their country and the true nature of Christopher Columbus’ deeds.

Throughout the process of changing the name of this holiday, our group has received many opposing questions, such as, “Wasn’t Columbus just a man of his time?” Our answer to this is no, he was not just a man of his time. Bartolomé de las Casas, a 16th-century historian who accompanied Columbus on a trip to the Americas, wrote in his journal that Columbus had attacked the Native American population for not bringing satisfactory amounts of gold to Columbus. Bartolomé de las Casas wrote of being horrified by the things Columbus had done.

Once the Queen and King of Spain were informed of his actions, Columbus was sent back to Spain and incarcerated. Even in his own time period, Columbus’ actions were unacceptable.

Another common question we have heard is, “Won’t changing the name mean ignoring the past?” By celebrating Indigenous Peoples Day we are not ignoring the past, nor are we choosing to ignore specific events in history. Celebrating Indigenous Peoples Day gives people the opportunity to learn about the deeds of Columbus and this very important time in our history without celebrating someone who committed genocide.​ 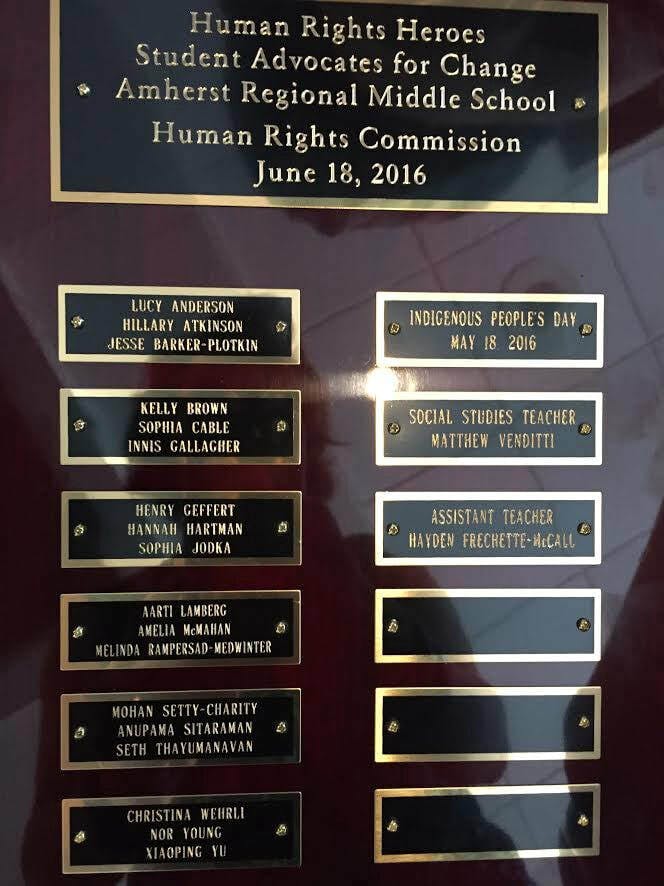 This is the “Human Rights hero” award that we won earlier this year.

Changing the name of Columbus Day to Indigenous Peoples Day is one way of educating people about the deeds of Columbus and an important period in our history, while also celebrating the rich culture that was decimated through the acts of Columbus.

We, the Student Advocates for Change have been working on this project for a little over a year and we believe that we are ready to bring this issue to the state level. With the help of our State Representative, Solomon Goldstein Rose, and the people of Massachusetts, we will work to take this big step towards recognizing and celebrating a group of people that has long been oppressed, and take a big step away from celebrating genocide.

SAFC is a group of students who started their work as middle schoolers and have continued their work into high school in Amherst, Massachusetts working to change the name of Columbus Day to Indigenous Peoples Day in Massachusetts. Their activism is ongoing. More about Student Advocates for Change (SAFC) > 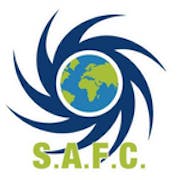