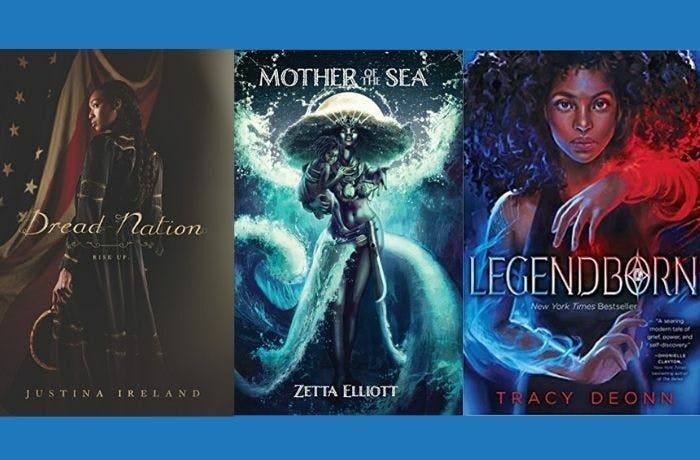 As a researcher of youth literature, a reviewer and creator I am constantly looking for new books to build my home and mental library of great reads. As a Black American woman and fan of YA, trying to make sense of 2020, there are some books, fantasy and science fiction especially, that I have just met or continuously return to for comfort, ideas, adventure, and empowerment. This is a list of seven sensational reads that can provide all of those things and more if you take the time to dive in. There's something for everyone in this list. You and your young people will find lots to love in these books that can keep you grounded in some ways and help you take off in others. End your 2020 on a high note with these reads. I know I will! 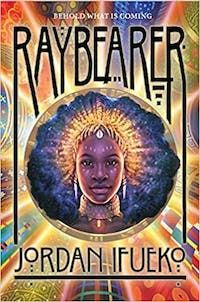 Ifueko’s tale of murderous intent, palace intrigue and young love that’s both familial and romantic is a gorgeously told fantasy inspired by West-African cultures and communities. Set on the fictional continent of Aritsar which has lushly imagined regions that run the gamut of diverse weather patterns and geographies, from the Asiatic mountains of Songland to Swana’s “balmy grasslands”, Raybearer details the journey of the would-be child assassin and half-djinn, Tarisai of Swana, who is charged by her mother with endearing herself to the crown-prince of Aritsar so that she can murder him. With, “fathomless black eyes,” rich dark skin, high cheekbones, and a coily cloud of black hair, Tarisai is the mirror image of her mother and unknowingly carries the legacy of hatred and betrayal that had her mother banished from the royal court where people seem to know her story but refuse to share it with Tarisai. All of the mystery leads to multiple confrontations where Tarisai must decide if and how she will develop her own path toward personal and public liberation. Although this story should and could be celebrated for the comprehensive world-building alone, not-too subtle social commentary on ethnic discrimination as well as class and gender inequality ensure that this book is epic for a multitude of reasons. The possibilities for engaging with the text across various social issues that can intersect with race are endless and not less poignant because of the fantastic landscape, the emphasis that Ifueko creates is critical and contemporary. 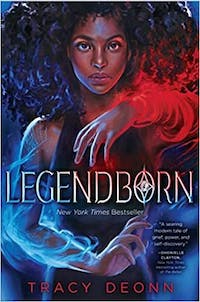 A contemporary Arthurian retelling that centralizes and emphasizes the reality of Black folks being all up and through medieval histories while also critiquing the overwhelming whiteness of these mythologies is the YA novel I didn’t know I needed until I read it. Bree Matthews is a genius sixteen-year-old searching for answers about her deceased mother on the literally and figuratively haunted campus of her mom’s alma mater. Bree ends up chasing her mother’s story through time and root magic, while also trying to stay out of trouble and undergoing medieval-style trials in order to join the stereotypically creepy Order of the Round Table, the university’s secret society binding together heirs of King Arthur and his knights. With elements of Southern gothic storytelling emphasized by the setting and the time twists PLUS captivating interrogations of generational trauma, Deonn provides a unique context for engaging legends that seem to be set in stone but can actually be reborn in inventive ways. 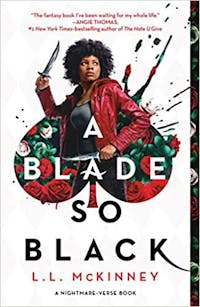 McKinney’s reimagining of Alice’s Adventures in Wonderland brings forward glorious action, magic portals around the world and a Black Alice whose, “will they/won’t they” liaisons with various characters ratchets up the tensions in the first two books of the series in delicious ways. Our new Alice is not dreaming under trees in frilly frocks, she’s learning how to battle with magic blades to defeat Nightmares, corporeal beings that are formed from fear, while also juggling the concerns and corrections of her mother who, in the tradition of many Black American moms, does not play. Canonical characters from the original Alice books are given contemporary updates breaking out of their bumbling nonsense with Dreamwalkers like Addison Hatta and the twins Dimitri and Demarcus Tweedlanov, showing up as well-trained killers. McKinney’s Wonderland is full of danger, breaking and awaking queer romance and so many fantastic fight scenes it will make your head spin… or roll. It also gives a lot of space for a Black teen to kick butt and take names while still being caught up in a world of hurt and grief. There’s space for Alice to be an undeniable force and also ask for and need serious help. This kind of multifaceted protagonist is a joy to follow through her misadventures through the Looking Glass pub and beyond. 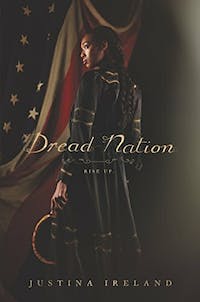 In an alternate United States, the Civil War is interrupted by a virus outbreak that transforms everyone it touches, no matter their race or ethnicity, into flesh devouring zombies, known as shamblers. Bodies rise up and the maws of former humans are covered in the blood of folks that they turn by ravaging and eating their bodies. Amidst the carnage that takes over the postbellum US teenage Black girls are trained to be elite zombie fighters known as Attendants rising up to become hired assassins to kill and rekill the deathless. A student at the renown Miss Preston’s School of Combat for Negro Girls, Jane McKeene ends up as one of the best would-be attendants and throughout the duology readers are treated to her defeating various horrifying circumstances as she is kidnapped, experimented on and sentenced to death, beating all of the odds to maintain lovers and a strong sisterhood with another Miss Preston’s girl, Katherine Deveraux, as they search for spaces where they don’t have to constantly fight for their lives and humanity. There is a lot to enjoy if you like a little bit more gore in your reading but it’s tempered very well with strong narration, the second book even switches up to include Katharine’s first-person voice alongside Jane’s in back and forth chapters which works wonderfully, fantastic pacing through both books and a journey for both women through the later part of their girlhood that actually takes them and the reader on a grand ride. 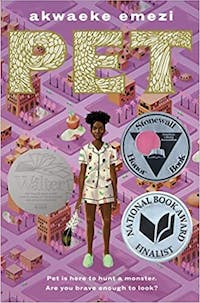 Set in a town named Lucille that is Everywhereville, and yet Nowhereville, Emezi weaves a tale about a transgender girl named Jam whose blood summons forth a hunter, Pet, through a portal in a painting. Pet arrives because although there’s not supposed to be any more monsters in Lucille, a city that offers a reflection on what life could be like if we abolish police and prisons, one still roams the city and is closer to home than protagonist 15-year-old Jam ever imagined. When Pet rises from the painting, glorious and grotesque it makes it plain that however long it takes the monster that remains in Lucille will be hunted down. What continues to touch my heart about this story is the gentle matter-of-factness that Emezi uses to settle understanding with words like, “Monsters don’t look like anything… That’s the whole point. That’s the whole problem,” and “Good and innocent, they not the same thing; they don’t wear the same face.” Also, seeing Jam’s girlhood acknowledged, supported and celebrated from the moment her parents understood her being is a picture of the possibilities of love that should be painted everywhere. The book provides powerful commentary on a host of social issues but the takeaway that sticks with me, especially now on the edge of expected major social change in the US and other spaces is that we should never forget the monsters, even when we think we’ve truly eradicated them, which is rarely the case. As Jam says, “Forgetting is dangerous. Forgetting is how the monsters come back.” 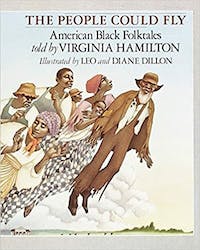 The People Could Fly

by Virginia Hamilton, illustrated by Leo and Diane Dillon

It may seem odd to have this collection of folktales be included on a list for young adult readers, but it shouldn’t be, especially since Hamilton’s historical footnotes provide chronological AND relational context for many of the more popular Black American novels coming out recently. There are B’rer animal tales, ghost stories that will haunt your dreams and stories that celebrate the hope of liberation that continues to evolve. All of these are complemented by the crisp black and white images created by famed illustrator couple Leo and Diane Dillon helping to ensure that this book remains a relevant resource for readers of all ages, including teens who can look toward this book for foundational insight into Black American folklore alongside exploration of other mythos around the African diaspora. 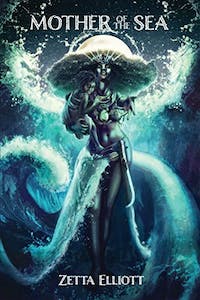 Mother of the Sea

Elliott’s story about an uprising of enslaved people on a slave ship, is focused through the perspective of a young woman who is stolen from her family, most of her people and her land. She is forced to walk miles, shackled to others before she is put into a cell where one night a child, “a gift from the gods” appears in her lap. This child is a very special child and when the young woman, Aduke, watches her slip away into the deep water as they are transferred from the cell on land to the overcrowded, with bodies and filth, depths of the slave ship, she is pleasantly surprised to find in night that the child is alive and well. She receives visits from this mysterious child at night, for she fills Aduke’s belly with food and her mind with thoughts of resistance. When the opportune time comes Aduke leads the bloody charge against the slavers in the midst of a tempest that has been summoned to share a deliverance that no one on the ship expected. Elliott’s detailed notes in the back of the novella provide personal and historic context for inquiring readers, deepening the intention behind telling this story of a Black teen girl fighting for liberation along with the ancient, avenging force of an Orisha goddess who nurtures and defends her children. This is the perfect story for history buffs AND fantasy folks, the story of a Black girl heroine who fought against captivity and found a freedom that lasts forever.

Breanna J. McDaniel is the author of the picture book Hands Up!, a book reviewer, education consultant and researcher. She holds an MA in Children’s Literature from Simmons University and is currently pursuing her PhD in Education at the University of Cambridge with research focused on representations of black children in contemporary picture books. She's the co-founder of Researchers Exploring Inclusive Youth Literature (REIYL) and though she's originally from Atlanta,GA she now splits her time between the US and UK. More about Breanna J. > 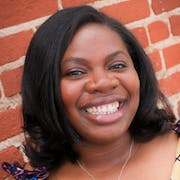