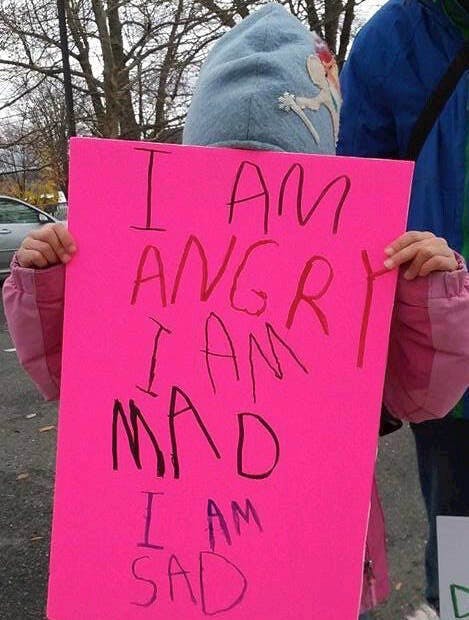 W​hen my son was four he saw me at the kitchen table with giant markers and poster board. He knew what that meant, and his interest was piqued. “Are we going to a rally, or a vigil?” He asked. I asked him what he thought the difference was and he responded; “I don’t know. They feel different.”

At four he already knew what activism felt like and, though he didn’t have all the words to describe his experiences, he knew how to ask the right questions. At 41 I am in much the same place. Now eleven, he has many more experiences to draw from, and so do I. He and his five-year-old sister have been raised in activism the way some children are raised in a church. Social justice and community involvement are where our core beliefs live, and our time and commitment reflects that. Let me be clear. My core beliefs may be different from my children’s, at times. I am not suggesting that we believe all the same things, only that it is a core belief of our family that we (collectively or individually) fight for what we believe in.

For us that has meant organizing around racial justice, women’s rights, the rights of the LGBTQ community, and climate change. Since those issues matter greatly to us having Trump elected feels a little like being drafted for a war I never wanted to fight. There is so much work ahead. 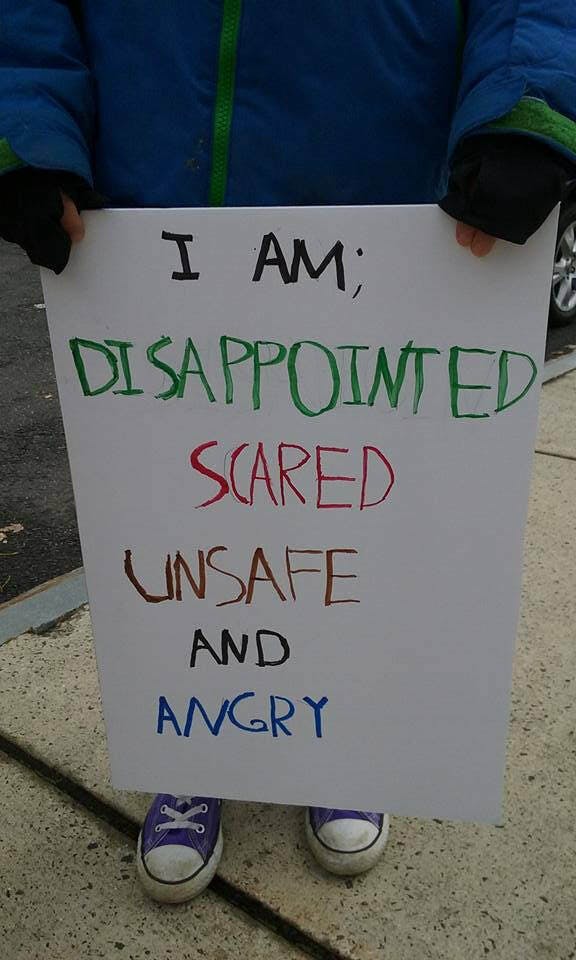 During the election I let my children know all of the reasons why I was opposed to Trump. On the morning of election day my five-year-old daughter said, “Well mom, if Trump wins we will just have to have hundreds and hundreds of rallies. We will be so loud we won’t even hear his voice anymore.” I’ll be honest: I couldn’t imagine it happening.

The morning I had to tell them he’d been elected was a low point for me as a parent. How do you look your child in the eye and tell them that so many people voted for a person who offends virtually everything you believe in, everything you have taught them to value?

I told them the truth, that I am sad and disappointed, and reminded them that they already have the tools to fight for what they believe in. Within 48 hours we were at a rally, taking back our power.

Activism is not new to my children. As an interracial, same -sex family we have never been afforded the luxury of complacency. That said, our political involvement will be escalating along with our fears about the safety and rights of those close to us, and the wellbeing of our planet. It seems likely that in this political climate more families will be coming out in support of what matters to them.

Here are some thoughts to consider when bringing children into direct activism.

1) Make it matter: Bring children to rallies, meetings, vigils, demonstrations and protests that matter to them. Do the work ahead of time to talk and learn about the issues so that they have an investment. It is exciting to be in those spaces but it is also challenging at times. What gets a child through the challenges is an investment in why they are doing that important work. When we prepare for an event my children choose what to write on the signs they carry. I often tell myself that if they can’t come up with something to say we haven’t done enough preparation yet.

2) Start Small: Attending a giant march in Washington DC is not a great introduction to activism, especially for younger kids. Start small with some local events, where the stakes are lower and you feel more able to manage your child’s needs.

By the time we went to NYC for the giant Black Lives Matter protest we’d already been to several local actions. By the time we went to the National Climate Change March, we had been working locally to fight the pipeline project for months. It is important that children understand the tone and dynamics of the issue before they are asked to manage that along with overwhelming crowds and unfamiliar places and people.

3) Prepare: A lot. For a march you can often find the length and route online. It’s worth looking into where there are restrooms along the route, finding a good place to cut out early (maybe near a train station or bus stop) if you are getting tired. Try to find out as much as you can about the tone of the event and prepare your children for what they might experience.

I try to name the emotions that my kids might encounter. I have said things like: “The people you see there will probably sound and look angry. They have a reason to feel angry because they are not being treated fairly and not being heard. Their loudness and anger is not directed at you.” I also prepare my children for language they may not hear in other contexts and I make it clear that I am asking that they not repeat it outside of that context. So far my kids have respected that boundary.

4) Pack light, but smart: This is general, common sense parenting advice, but in a stressful, chaotic situation it becomes especially important. Bring plenty of cool drinks and sunscreen for hot days and warm drinks and layers for cold days. Bring good, healthy snacks to postpone the inevitable crash.

If I’m really on top of it I bring a “Question Book.” The kids know that there are some questions I need time to think about or a quiet space to talk about, so when those come up I write them down as a promise to come back to them later. With really little kids this might be a good time to drag out the stroller or baby-wearing gear that you aren’t using very often anymore because the standing and walking can be exhausting and also because that can create a safe space for an overstimulated child. Remember, your kids cannot see over the crowd and you are likely stressed out about keeping them close. Most kids have a short attention span for being dragged through a sea of legs.

5) Have an exit strategy: Activism is sometimes unpredictable. Emotions can be charged and a friendly event can take a different turn, unexpectedly. Have a plan in place if you need to make a quick exit. I have told my children that if I say the words “We need to go right now” there can be no discussion about it, no begging to stay or arguing about leaving. I would only use that language if it felt clear that safety was an issue.

6) Get your child’s consent: When I invite my children to an action I offer them all the information I have. I will list the who, what, when, where and why of that particular opportunity. When I tell my kids about an action I also provide them with an alternative if they don’t want to participate. I feel like it is really important that they are making an active choice to be there.

The same standard of consent remains throughout the event. If there is a shift from a sanctioned event to an act of civil disobedience, that requires an explanation and another choice. If you bring children to an action, you should be prepared to leave with them if they feel unsafe or uncomfortable.

7) Don’t assume your child is having the same experience you are. Check in with your child often and pay close attention to their verbal and non-verbal communication. I ask my kids questions like:

“How does it feel to be here?”

“Is this what you imagined it would be like?”

“If you could change one thing right now, what would it be?”
​
Be prepared to listen and respond to any concerns they may have. When kids feel safe and heard they feel powerful and when they feel powerful they believe they can change the world. We want them to believe that because ultimately, it’s their world.