Homeschooling My Black Son for Liberation 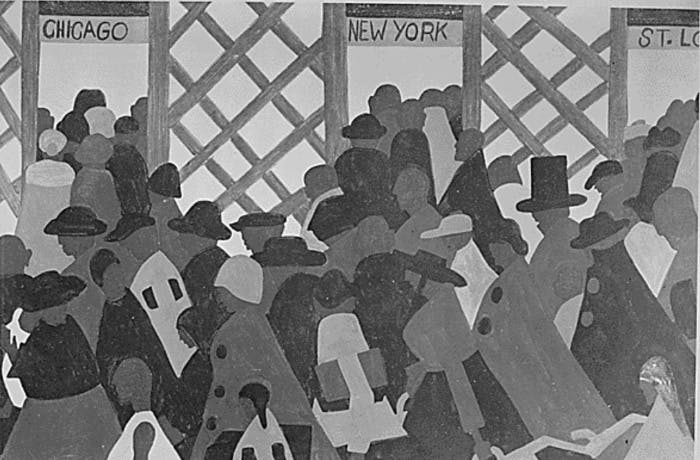 During World War I there was a great migration north by southern Negroes. Painting by Jacob Lawrence (black-and-white reproduction of color original).

For Black people in America, education is synonymous with freedom. My son’s paternal grandparents were born and raised in Georgia during the Jim Crow caste system. His grandfather attended Morehouse College, a historically Black college, and graduated in 1959. Shortly after, he joined the army for 3 years.

When he was done, he and my son’s grandmother packed up their 2 children, soon to be 3 and left the South for good. They joined nearly six million Black people, all escaping the South for a more promising life in northern and western cities: the Great Migration. My husband was the child born in California, full of the hope his parents brought with them from the south to create their vision for a better future in the west.

I wonder what they would have thought of our choice to homeschool our son. Both of his paternal grandparents died long before we became a family. I imagine they would be proud. Proud that we are placing such a high value on our son’s education and raising him to be a free thinker. Their hopes and dreams for future generations carried on through their grandson. 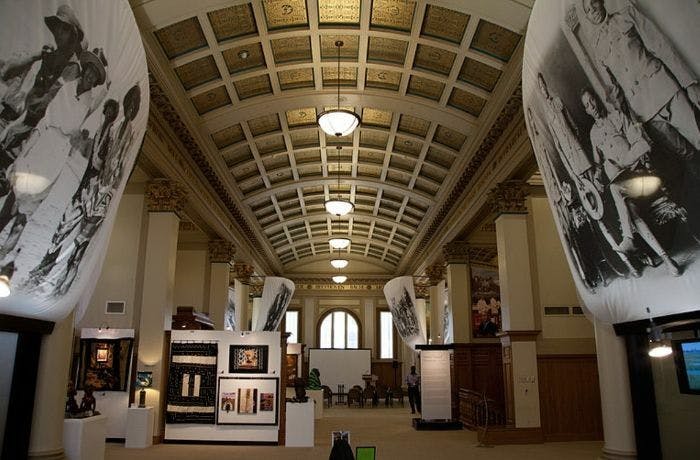 The African American Museum and Library in Oakland, CA.

Our family is multi-racial. My husband and son are Black and I am White. Even though many might label our son biracial, he identifies as Black.

As his mother and a White person, I encourage him to embrace his Black heritage and to learn about the history of the Black side of his family. Since he is a Black boy in America I believe it is key to his survival to know and have pride for his Black roots. Our family strives to be more race conscious and discuss race head on. Because I’m White, I have different work to do. To practice being anti-racist takes time, it’s about education and understanding how white supremacy works.

Our homeschool philosophy leans towards child-led learning. Although there are certain subjects our son is required to study, I integrate his interests and he is given plenty of free time to explore topics of his choosing. The impetus to focus on Afrocentric studies came from our son.

This fourth grade year was difficult in that he was exposed to some harsh history, learning what most fourth graders in California learn about, the Spanish Missions in the state.

We didn’t cover the topic for long because my son was overwhelmed with the injustice of how the Native Americans were treated. He also came across offensive, racist images and language in Eurocentric books that stared him in the face and expressed just how much disdain white culture has for people of color. After this, he made a concerted effort to learn from an Afrocentric perspective.

While homeschooling affords us the ability to seek out Afrocentric books and information we are inevitably going to come across something offensive and racist. But with proper tools, our son will be able to confront it head on. In the meantime, I will do my best to weed out books that will only deter from the learning experience and not enhance it.

I liken our son’s homeschool experience to that of a Historically Black College and University, sheltering and protecting him from institutionalized racism. Homeschooling allows him to safely explore his heritage from an Afrocentric perspective. Through learning about his history, he can be proud of the brilliance, strength and resilience of Black people. 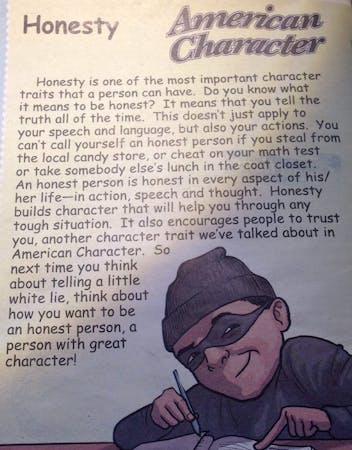 One of the texts/images my son decidedly did NOT like!

Some of my son’s favorites

Each subject has African studies woven in. He learns about history through an anti-colonialist lens. His favorite literature includes a comic series called Golden Legacy with titles such as The Birth of Haiti — Toussaint Louverture and Frederick Douglass. He is a sports fan so he loves the book, We Are the Ship: the Story of Negro League Baseball. He reads about Black artists like Jacob Lawrence and poets like Langston Hughes and Amiri Baraka . The common thread: getting free by any means necessary.

A unit study which was particularly enjoyable during this 4th grade year was African American poetry and hip hop. We went to our library and took out multiple books on the subject. He read as much as possible and listened to music samples. He enjoyed it so much, it’s more of an on-going unit now. In his 5th grade year we will focus on other genres like the blues, jazz and Motown.

The African American Library and Museum is a local gem we frequently visit. The corner that my son continuously gravitates towards is the Black Panther display. He focuses on the “Free Huey” poster, visibly fascinated with the time period. He feels connected, having grown up most of his life in Oakland and knowing that his dad went to school with Huey’s son. It makes it real.

We often discuss how the current Black Lives Matter movement is a continuation of the struggle for black people to get free. He asked about a headline in the local paper discussing the the Frisco5 hunger strike. We talked of police brutality against people of color. Homeschooling allows us to build on complex subjects around race. It’s about making connections from the past and relating it to life today.

My son in bloom

As Richard Wright wrote so eloquently:

I was leaving the South

To fling myself into the unknown….

I was taking a part of the South

To transplant in alien soil,

To see if it could grow differently, if

it could drink of new and cool rains,

Respond to the warmth of other suns

And, perhaps, to bloom.

I like to think of our son as the “bloom.” Responding to the love and hope that we, along with his ancestors seeking a better life, carry for him.

Gillian homeschools in the Bay Area. More about Gillian >