Explaining to My Eight-Year-Old That Yes, She Too, is Racist 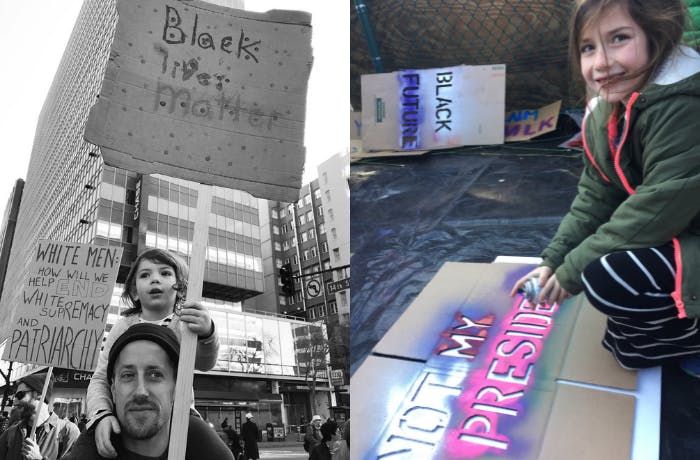 (L)The author and his younger daughter, Aya, at a BLM protests in 2017. (R) The author's older daughter, Noa, at another pre-COVID protest in 2017.

On a recent road trip up the California coast, with our kids zoning out on an iPad in the backseat, my wife and I turned on the fantastic podcast Code Switch. Halfway through the episode, one of the guests, a Black man named George, remarked: “Everyone's racist.”

From the backseat, our younger daughter, 8-year old Aya, who like her parents is White, suddenly interjected: “Not me. I’m not racist! Why would he say that?”

My wife and I shot each other the how-are-we-going-to-respond-to-this-one glance.

Aya thought about my answer for two seconds before rebutting, “But I would never do that. I play with everybody at school and I don’t care what they look like.”

This was not the first conversation my daughter had engaged in about race and racism. Growing up within a community of anti-racist caregivers and organizers, she had attended teach-ins about White privilege and how to intervene as a bystander against racism since before she could read. We talk regularly as a family about racial inequities in our local school system, about police killings of Black people, and about the horror of immigrants being separated from their families. And we’ve made it clear that her White privilege will protect her from experiencing many of these harms.

Something was missing from our family conversations. We have talked with our kids about racism as something other people are guilty of perpetuating ... We’d like to think it’s just those few bad apples. But it’s not just them; it’s us, too.

But in that moment, I realized something was missing from our family conversations. We have talked with our kids about racism as something other people are guilty of perpetuating: the police, Donald Trump, and White people like the infamous BBQ Becky who called the cops on a group of Black men not far from where we live in Oakland.

We’d like to think it’s just those few bad apples. But it’s not just them; it’s us, too.

Back on the road trip, with hours to go before we would arrive home in Oakland, I reminded Aya of a bedtime conversation we’d had several weeks earlier. The author of the book she was reading had just introduced four new characters, and described only the first two by the color of their skin: dark olive, and brown. I had asked Aya, “What race do you think the other two girls are?”

I probed further. “Hmm. I wonder why he didn’t explain they were White when he told us what race the other two girls were. What do you think is the reason for this?”

Aya replied, “Because he thinks White skin is the normal color.”

We talked about how Whiteness is not actually normal for everyone, and we imagined how it might feel to be a person of color in a society always being judged against White norms. “I don’t think the author was trying to be racist,” I told her. “But still, I think he was being racist, would you agree?”

“No, not a bad person,” I agreed, “but maybe that was the kind of racism the person on the podcast was talking about. I guess it’s hard to think about ourselves as being racist if we’re also trying really hard not to hurt people of color?”

But she had turned back to the iPad. Enough for one day.

Recently, while preparing a lesson on racism in the math and science fields for my undergraduate students at the University of California, Berkeley, I re-took Harvard’s implicit bias test. I’ve shared this test with my teacher education students before, and taken it myself several times, so I understood how to answer the questions in order to prove that I don’t have racial bias. Despite my efforts, my results again suggested that I have a slight preference towards White people. Intellectually, I knew these results don’t make me a bad person, but I felt shameful seeing them on the screen. I thought about my discussion with Aya on our trip and wondered: Is my own bias something I could ever share about myself with my kids? 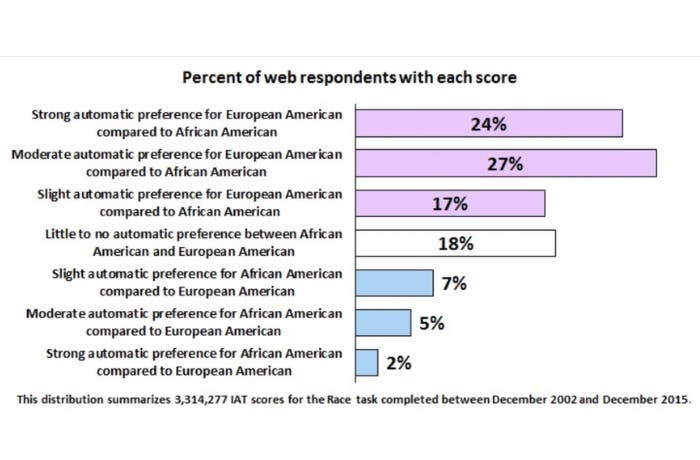 And then, a few days later, I walked past a Black man in my neighborhood. He was shuffling a bit erratically, with only one arm inside a sleeve of his jacket that flapped in the air behind him. I could almost visualize the split-second thoughts traveling across my mind: Is he drunk? Is he mentally unwell? Is he going to mess with me? I wondered how differently I would have reacted if the man was White. As we passed each other, he gave me a big smile and I nodded back sheepishly.

So that night I tried something that I haven’t done before: I admitted to my kids that I have racial biases. I told them the story about my brief interaction with the man on the street, focusing not on the specific thoughts I had about him, but instead on the flash judgments I made and my curiosity about how those were impacted by race - both his and mine.

So that night I tried something that I haven’t done before: I admitted to my kids that I have racial biases. I told them the story about my brief interaction with the man on the street, focusing not on the specific thoughts I had about him, but instead on the flash judgments I made and my curiosity about how those were impacted by race - both his and mine. Only seconds passed before my kids responded, but during that brief window I managed to construct a list of all of the horrible things they were surely thinking about me. But again, as usual, I was wrong.

“Yeah, I know what you mean dad,” said my older daughter, 11-year old Noa. “I guess that happens to me too sometimes.”

I grew up in the progressive enclave of Cambridge, MA, learned about the civil rights movement, and understood that racism existed. But never - not at school, nor at home - did we talk about Whiteness or the fact that we all held racial biases. It wasn’t until adulthood when I taught at high school for social justice in Brooklyn, NY did my colleagues - mostly people of color - clue me in to the importance of exploring my Whiteness as a precondition to effectively address racial injustice. Over the next two decades I was fortunate to attend workshops like ‘Undoing Racism’ from the People’s Institute for Survival and Beyond, participate in a White affinity group in graduate school, and find mentors who guided my practices as an aspiring anti-racist educator.

And then, I became the parent of two White girls. 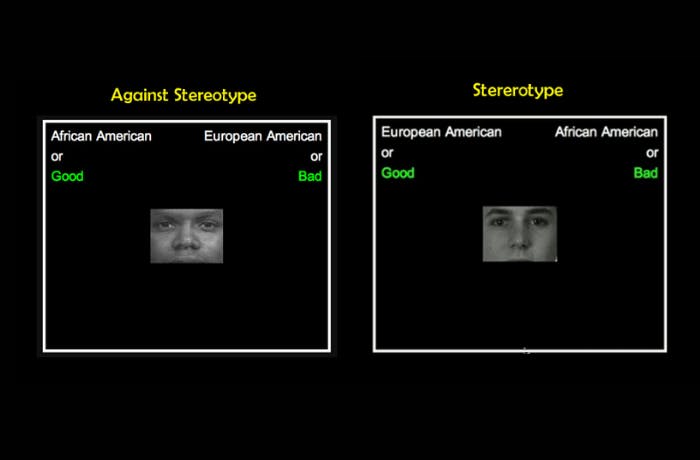 Despite my naive longing to raise bias-free, anti-racist babies, my kids obviously harbor implicit biases and have the capacity to act in racist ways. But unlike me, they’ve discovered this truth at a much younger age.

“Dad, I wrote a journal entry about racial bias,” Noa announced at dinner a few nights ago. I looked out of the corner of my eye at our dinner guest, a woman of color, who was listening attentively, afraid that Noa was about to reveal the cringe-worthy experience I’d shared with her. “Then I read it to my whole English class,” she continued. “Want to see it?”

She pulled out a black and white writing notebook; across the top of the page was the prompt: “Week 11 Learning Target: I can examine my biases before reading.” And below that, in pencil, Noa had written an entry which began:

Sometimes I do have an unfortunate bias. If I am walking my dog down the street and I see an African American male, I sometimes notice myself pulling my dog a bit closer, and preparing my body for certain circumstances. I am very disappointed in myself, but I also realize this is how lots of society was taught.”

Yes, her story came pretty close to mirroring the one I’d shared, and her ability to recognize her biases in other contexts -- such as interactions with peers -- remains to be seen. I also want my girls to develop and trust their “uh-oh” feeling, while still interrogating the role their racial biases might be playing in their reactions to situations they perceive as unsafe.

Ultimately, my biggest takeaway from this conversation is that it proves I can either be courageous and inspire action, or be silent and raise kids whose unexamined biases might lead them to cause real harm. 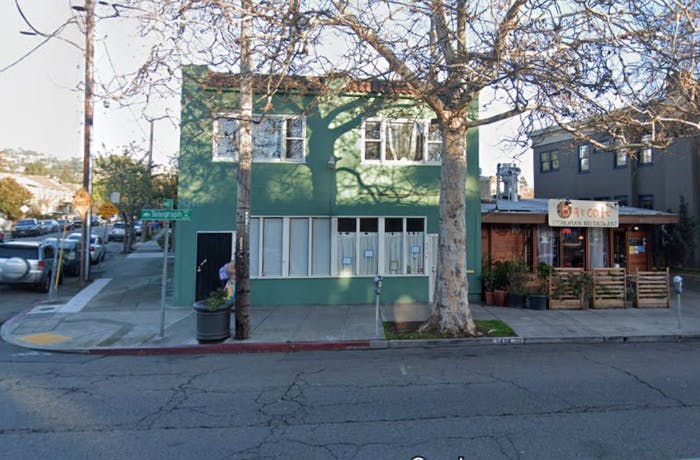 The author's neighborhood in Oakland.

For an increasing number of White families, talking about racism and White privilege has become much more common. We dutifully ply our kids with the right books about the extraordinary achievements of people of color, and take them to the right marches to express their righteous outrage against the latest injust. Just as Ibram X. Kendi asks of us, we’re trying to raise our kids to be more than “not-racist” -- we’re hoping they’ll become actively anti-racist.

But a critical, and often missing component of our work cultivating anti-racist White kids is the more personal work of exploring and owning our racial biases. White parents need to normalize vulnerability by talking with our White kids about how their - and our - unexamined biases influence the ways we act, behave, make decisions, and treat other people every day.

Racism isn’t just something “bad” or “other” people do. A consequence of distancing ourselves from overt White supremacists, police officers, and deportation-happy politicians, is that we close down opportunities to talk with our kids about how we all have the capacity to think and act in racist ways. Just because I’m not holding a gun doesn’t mean I’m not weaponizing my Whiteness.

Ultimately, my biggest takeaway from this conversation is that it proves I can either be courageous and inspire action, or be silent and raise kids whose unexamined biases might lead them to cause real harm.

I suspect that Aya isn’t going to become a police officer, pulling over Black motorists for driving in the ‘wrong’ neighborhood. But she very well might become a teacher who, because of her unexamined biases, is more likely to discipline Black boys and not refer Black girls to gifted programs. Barring a major departure from parental norms, Noa is not going to become the type of politician who campaigns on building border walls, but she could have the capacity to unnecessarily call the police on a person of color. I realize that all of these outcomes are possible despite my parental interventions. But if my kids can recognize and challenge their racial biases starting from a young age, I think they are less likely to cause harm to people of color as they grow up.

In order for us to have a shot at rewiring our implicit racial biases and addressing our racial blind spots, we have to first be willing to acknowledge that they exist. For those of us who are also parents, we have to get much better at having this conversation with our children. It’s not enough to acknowledge our White privilege and talk about how bad some other White people are. We need to share that we have ugly, shameful thoughts and reflect aloud about where these racist notions came from in order to model this process for our kids.

Because, the kids are listening.

For more than 20 years, Jonathan Osler has worked to advance educational equity and racial justice as an educator, nonprofit leader, and parent organizer. He is the curator of WhiteAccomplices.org, the co-founder of several equity-centered parent… More about Jonathan > 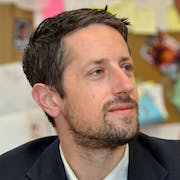