Practicing anti-racism with our White preschooler 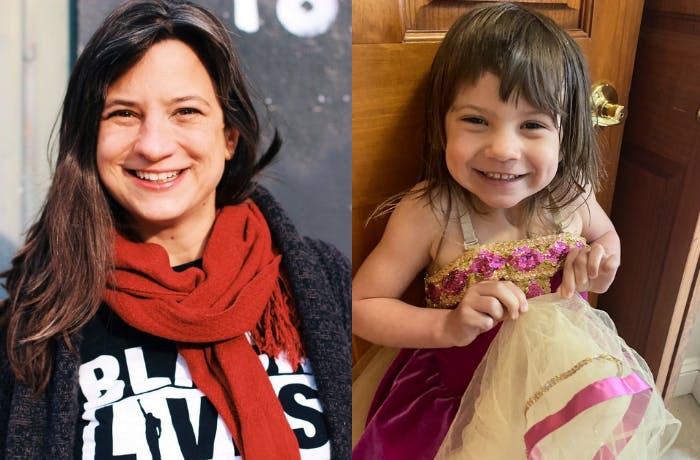 A few weeks ago, I tried to explain slavery to my three year old.

Now this is not a family tradition. I grew up in Oshkosh, Wisconsin in a family of good White liberals. My dad was a college professor and the city was mostly White, small Hmong population and just a handful of international professors. I was like a nerdy, young feminist that would participate in Amnesty International letter writing campaigns. And I'd tell people in Bhutan, I was like, "You have to free these political prisoners!" But I was rather ignorant of any of the injustice going on in my own country.

So we had been trying to raise our daughter Olivia a little bit differently, with really open conversations about race and privilege. When she was just a few months old, my husband and I took her to an immigrant rights protest. I was breastfeeding her as we were walking and chanting. I read her Antiracist Baby and books about Ramadan and Bannock. And we've combined all that open conversation with one of my family traditions, which is making everything a teachable moment.

So for example, when we watched a short film Hair Love, I talked about how people have all different kinds of hair, and they're all beautiful, but in different ways, and you can't touch other people's hair without their permission. Just how you are in charge of your own body, other people get to be in charge of theirs.

So flash forward, after the murder of George Floyd, someone stenciled images of him around our neighborhood. And I can remember her asking, "Who is that?" And I explained that some people made some very bad choices and they killed him and we are very sad about it. And now whenever she sees those stencils, she says, "That's George Floyd. We miss him." I took her to a couple Black Lives Matter protests, and she got really into yelling, "Arrest the police," and then accidentally pushing her stroller into other people's ankles.

Now she's nearing four, and Olivia has long sun-bleached hair. It's light brown. She's got bangs that she chopped right in the middle near her forehead, because apparently it's her body and she's in charge and gets to decide.

She has my eyes and my stubbornness and my Whiteness. So we need to keep having these conversations about race and Whiteness early and often. So on one hand, she does understand that Black Lives Matter. She recognizes the typography and she yells it out whenever she sees the signs around our neighborhood, or even when we bike through a tunnel, because our family traditions include going on bike rides and also enjoying echoes and yelling even if strangers give us weird looks.

But even while she's yelling, "Black Lives Matter," I wasn't sure if she understood that society literally labels people "White" and "Black." And that those labels also really affect how people are treated. I mean, me personally, I've experienced this. Once I was driving near Milwaukee's central city, and I got pulled over after making an illegal U-turn. The officer acted all concerned for me because I was driving through what he called an unsafe neighborhood that was dangerous for me.

I had just learned about asset-based community development and so I was kind of snidely replying, "Well, I believe there's assets in all our neighborhoods." Very academic, but I was trying to get it out. I think he was shocked because maybe he expected me to thank him. See, I want Olivia to understand all of that. Not just that Black Lives Matter, but the reasons we need to yell that, and the reasons we need reparations, and the history of a country that protects a White body like mine and exploits Black ones. So I decided to just jump in.

It was a weekend. We were in the living room. It was between art projects. I think we were sitting on the couch and I say, "You know, when they talk about Black Lives Matter, what they're talking about is Black skin and White skin. But it's not really the color Black and color White, right?" And I asked her, "Do you know anyone that has Black skin? They probably have curly hair and dark skin. Our skin's kind of peach but much darker, right?"

And I'm expecting her to mention someone from daycare or someone we know. And she replies, "Maui." The muscled demigod from the Moana movie, the guy voiced by Dwayne the Rock Johnson. Okay. He's got long spirally hair, brown skin with magical tattoos, except he's Maori. My internal A student starts freaking out. I'm like, "Oh, well some Polynesians maybe consider themselves Black. And there's multiple theories to their origin, but they're most likely Southeast or Asian, and okay, on one hand, this is good. Because we're identifying that race is a social construct, but aren't we also doing like Black erasure? And how come my daughter can't name an actual Black person after all my efforts?" I'm like, fail, fail, fail. So I go ahead and change tactics. Because slavery isn't just about skin color, it's also about power.

And I ask her, "Is it okay for one person to hit another?" She says, "No. Benji, him hit me, him naughty." We talked about her friend at daycare. We agree that hitting is not nice. We don't do that to other people's bodies, right? We don't like his choices, but he isn't naughty. But then we go on this tangent because we have to talk about Dominic for some reason. Apparently Dominic is now her best friend and not Benji. And it just goes on.

So eventually I try to bring it back. I'm trying again to find something relatable. And I go, "Can you imagine if someone took you away from me and Dada?" And she says, "Yeah. I have a bad dream." This caught me completely off guard. And my heart just drops. And I ask, "Was it scary?" "Mm-hmm (affirmative)." I pull her onto my lap. I comfort my little girl. I say, "We won't let that happen." While also knowing that it is happening, ICE is separating families, prison industrial complex is locking Black men up left and right. It's just that we're White. So that's not happening to us. And probably I can make sure she's not taken away from me.

And there I'm holding her. And I'm afraid that I am scaring her. That I've scarred her. That maybe I've just painted people of color as victims, that maybe I'm encouraging her to have White tears. I mean, I didn't even start to explain slavery. And at the same time, I'm also trying to reflect and reframe. Because we were having an open conversation, and that is way better than silence. And we're not going to unlearn generations of White violence in one day. And for that matter, now we have a topic to research. And that is something I can actually do. So I go online, I find a book about skin colors and melanin and I order it from a Black-run bookstore. And after I read it to her, I quiz her. Because that is also kind of a family tradition. I'm like, "Do you think your ancestors came from a hot sunny place or a cooler place?" And she's real confident. "A cooler place."

"Yeah. And our skin is White, but really it's peach, right?" Okay. "What about Mimi? Remember Mimi? Did her ancestors come from a sunny place or a cooler place?" "Sunny place." "Yes. Yes. And her skin is dark brown, but they call it Black. Okay. Olivia, did you know that some White people are not nice to Black people? A long time ago, but also now. Is that okay for White people to hit Black people?" "No," she replies. "No, no. It's not okay. Black people like Mimi should be in charge of their own bodies and make their own choices. So, that's why we say Black Lives Matter and we have to work for justice."

Okay. So I know I still haven't actually explained slavery to her. I mean, that's pretty lofty given that her concept of time is like now, tomorrow, and when I was a little baby. So it's going to take some work to go back through all the hundreds of years of history, through concepts like bias and institutional racism. But also collective liberation and pleasure activism, assuming that I ever actually finish the book that is sitting on my nightstand. But we have a lot to learn. And I know that together, we're going to cover all of it, because these conversations and the practice of together as a family, taking anti-racist action together, all those things are becoming our family traditions.

Megan McGee lives in Milwaukee, WI with husband John and her daughter Olivia. She’s the Executive Director of Ex Fabula, which connects Milwaukee through real stories. More at www.exfabula.org. More about Megan > 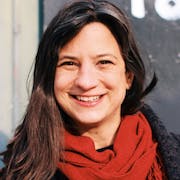