On The Front Line In Charlottesville

A mom recounts the experience of counter-protesting 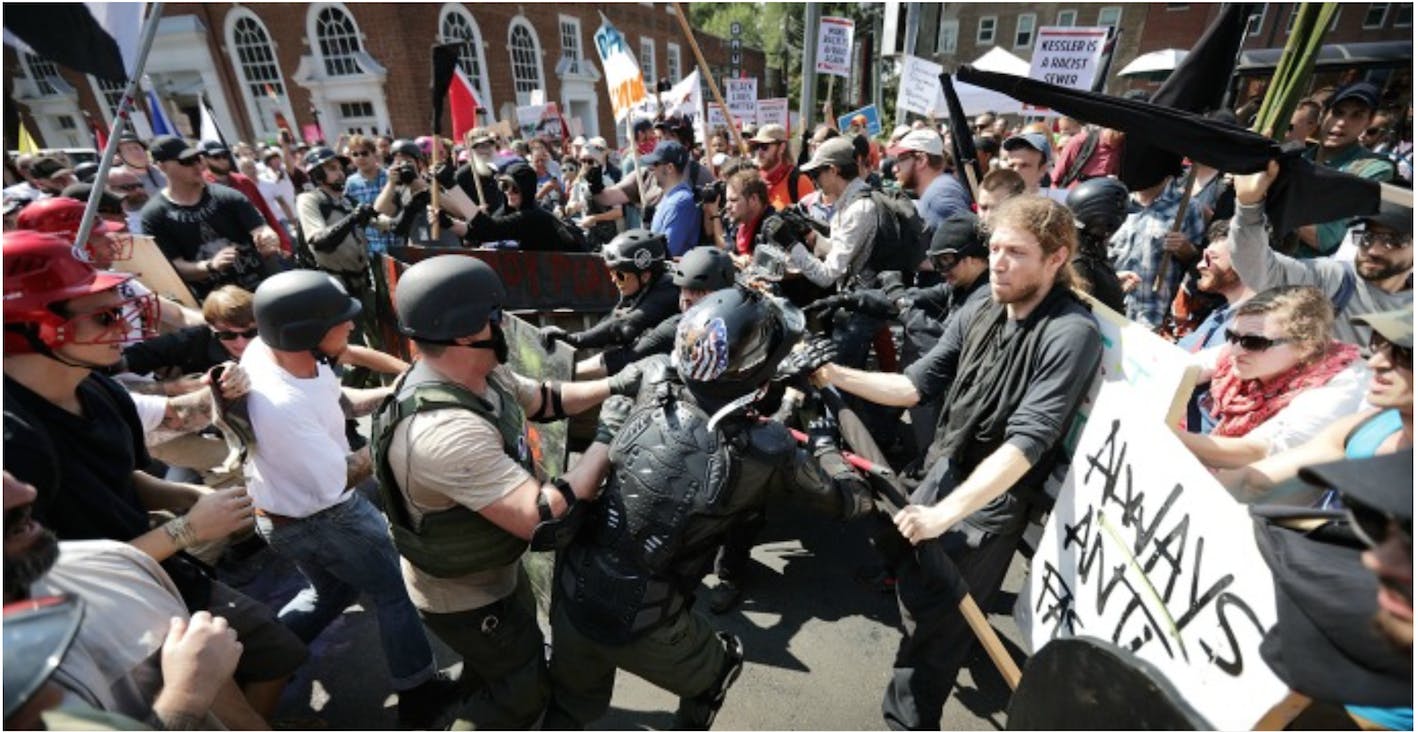 White nationalists and neo-Nazis clash with counter-protesters as they enter Lee Park during the ‘Unite the Right’ rally August 12, 2017 in Charlottesville, Virginia.

Patty Nourse Culbertson, who was in Charlottesville as a nonviolent resistor to Unite The Right, originally wrote this piece as a FaceBook comment. She says she came across a "wonderful post that Dan Rather wrote [on August 15, 2017]” about the counter protest in Charlottesville and saw many commenters to that post had only criticism for Charlottesville. She posted her response to the critics on her FB page and it went far and got to us. Her post is reprinted here with minor edits and format changes.

My daughter and I went to the rally on Saturday. I want to tell you a little about that. But first, I would like people to understand what it was like in the days leading up to the Alt Right Rally.

We first had to endure the KKK rally a month ago where about 30 Klansmen showed up and a whole lot of riot police and about 1000 community members who stood up for racial justice. We were told they would be armed, nevertheless, we showed up. Families, teenagers, college kids, moms, dads — that’s the “Alt Left.” We sang songs and held hands and walked with the clergy collective singing We Shall Overcome. A few angry people, but mostly loving people concerned about their community. We breathed a sigh of relief when we got through that but next we had to face the Alt Right.

The Dread We Experienced

We were scared. We were not naive. We knew this was a whole different ballgame. It felt like a slow march to death. They were threatening violence. Said they were coming to hurt people. Yet because of free speech rights, we couldn’t stop them from coming.

There is so much more to say about that. That we, as a nation, need to say about that! Some of us took nonviolent direct action training to prepare. Went to many meetings to strategize. How does a community of civilians, with no experience, strategize against a planned terrorist attack?

Some of us planned to stay at home. Some of us left town or were out of town on planned vacations. Some of us knew we would face them. I’m a military brat, and a 20-year former navy wife. Grandfather and father were West Point grads. Former husband, a Naval Academy grad, and a navy pilot.

I don’t know if it was my military background or not, but I cannot express to you the dread and frustration I felt as a planned attack on our town could not be stopped by legal means.

We were not armed; they were. We were practicing nonviolent tactics in order to face armed men. Many of us knew that people would be hurt. I felt strongly that there would be deaths. I am both devastated and relieved that there was only one death.

When I hear our president talk about two sides, I want to throw up. There are no two sides when guns are involved. When I hear people who were not there try to equate the sides, people who did not experience the dread we experienced as the date approached, I feel livid. The frustration that this could not be stopped — an armed invasion in the United States of America. A planned terrorist attack.

Some got caught up in first amendment rights talks. I did not. There is no freedom of speech when guns are involved. We are civilians. We didn’t know what the hell we were doing, but we showed up. We showed up.

My daughter and I drove through the night from our vacation spot in Maine because we decided we had to be there. We had to help. As we arrived close to town we stopped at a rest area outside of Charlottesville to change out of our grimy travel clothes and met our first car load of terrorists — guns and Confederate flag-toting men stopping to use the rest room with us. They had a permit to invade our town. Can everyone understand that? — they had a permit.

The police were there with us, and did almost nothing. I have to believe that this was because the beatings and brawlings were better than a gun battle. Our town was filled with gun-toting self-appointed militia protecting the Alt-right. Ak47s strapped on big men, others with long poles, and shields. They had pepper spray and tear gas, and they used it on us. They beat us, they taunted us. The police did nothing but stand guard.

They Broke Up into Small Bands and Roamed the Neighborhoods

Is this what you would want in your town? When a state of emergency was called, they were forced to leave. They marched out of our town, down Market Street heading to Mcintyre Park where we have picnics and carnivals and where the 4th of July fireworks are every year. Others broke up into small bands and roamed the neighborhoods.
​
My daughter and I left when they marched out of the park. I felt such dread. Where were they going? What next? But we were exhausted and left. When I got home, I checked FB and friends were saying with alarm, "they are marching through this neighborhood, and that neighborhood causing havoc".

And as I decided whether I should go back to help, a post comes up from a friend that a car has crashed into some protesters and someone has died. My friends. My friends. I started calling those that I knew were still there. One said she was ok. The other said I am ok but people are on the ground bleeding all around me, and I have to go. I have to pull them out of the road before he comes back and she hung up.

What is Free about Any of This?

This could be your town. My town. My peace. My home was shattered and not just on that day but on all the days leading up to it. And Heather, brave Heather died and so many others with serious injuries. And we could not stop that because the Constitution says that they must have free speech. Free speech backed up by big guns. What is free about that. About any of this.

So please do not tell us anything about what you think about how we handled this. Just think about if this was your town, your kids, your park, your home. Know this, they are not through. You will be asked to stand up in ways you may have never stood up before. We will stop this. We, together, will stop this.