Explaining Charlottesville to my 7-Year-Old 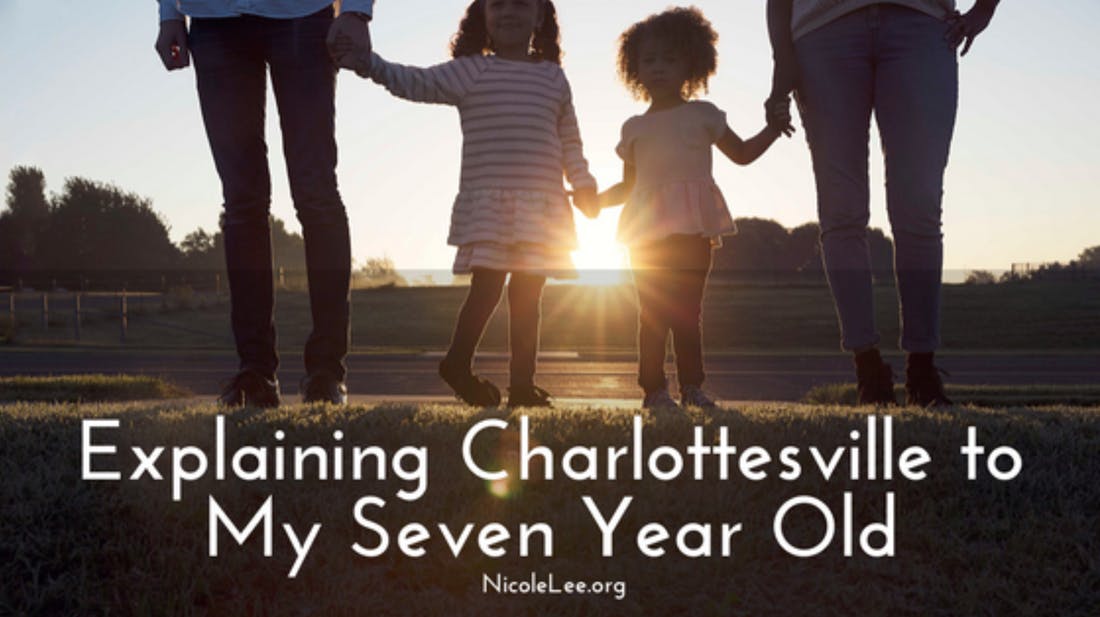 Because I am African American raising children of color, and because of my professional experience in social justice, equity and inclusion work, many people believe that my children have an advanced, even adult-like understanding of these complex social issues.

No. My children understand these issues the way a seven and four-year-old would.

Further, research shows children process and understand these issues based upon their developmental stage and positive communication with adults. Children don’t have the context we have about the world. They do not have the layered understanding that age and experience bring. At the same time, all the research says that we must talk with them about identity — race, gender/gender identity, ability, class and so many others — because:

(1) They are at the optimal time in their lives to build the foundation for a lifetime of social-emotional learning;

(2) If we do not, children do not learn true empathy (see the book Nurture Shock) and they absorb the -isms of the dominant culture.

Because of our work, my husband Marc and I are often personally and professionally affected, making honest and clear communication with our children is essential.

​Charlottesville was no exception.

By Friday evening, it seemed likely that we would need to talk with our seven-year-old daughter. When the car attack happened, we knew we would. It helps me to think about this part of parenting in steps. Often these moments are chaotic and charged, the opposite of what positive parenting requires.

Here is our approach:

(1) Getting the information ourselves.

As an adult, you first need to be able to have and absorb the facts. Because Marc and I heard it first from our colleagues at the scene of the car accident, we had a few minutes to take it all in before we heard it from the media. We had to spend some time getting hold of folks we knew in Charlottesville.

If you can avoid it, try not to tell a young child about an incident like this when you are still trying to get the facts you need. Sometimes that means you have to leave the room. Or the house. They pick up on your worry and uncertainty. Sometimes it translates as “parent/caregiver is worried so I’m not safe.” Sometimes what has happened may directly impact you and/or your child. Then it is even more important to get clear on what is happening so you can take appropriate steps.

Once you have the information, you will have feelings. For me, my feelings were super complicated and very negative. I had to do some preliminary processing before I presented the information to my child. If you can’t process alone or you are visibly upset in front of your child, NAME the emotion you are experiencing and tell the child that s/he is safe (“Mommy is so sad, but we are ok.” Or “Daddy’s angry and we have to find a safe place.”)

(3) Give yourself some talking points, a script or roadmap.

This not something you can wing. You have to decide what you are going to share and what you won’t. I decided I would tell my daughter about the protest in Charlottesville, the clergy and community response, and the death.

It was important to me that she know there are groups of people that don’t like “brown” (her word) people but that brave people stand up against hate. It was important to tell her that this struggle is historical and not separate from the books we read about the civil rights movement. Too many children are left to fill in the historical and informational blanks for themselves. We have chosen as parents to make sure we are the primary teachers about hate and oppression, and also about solidarity and love.

"Some people don’t like “brown” (again, her word) people or people with different religions. They say mean things and sometimes they hurt people. Some people like that went to Charlottesville this weekend.

Really good people like ministers and activists went to Charlottesville to let those people know what they believed about brown and other people was wrong. Unfortunately, one of the “bad” people hit a whole bunch of people with his car. One woman died and there are a lot people in the hospital.

We are safe. We are also brave and we need to make sure we stand up to people when they do and say mean or hurtful things."

I did not use terms like “Nazis” or “white supremacists” because we are lucky enough she doesn’t know what those words mean yet.

Also, I did not share with her that people she knew were there. At seven, the fear that would instill in her would be hard to process. A colleague of mine, whom she calls her “brother,” was there. I didn’t remind her that I had been involved in any way. It would be both too abstract and too scary for her. Had something tragic happened to someone my daughter knows, I would have told her. In that case, I would have owed her that truth.

(4) Try not to invest in getting a particular response from your child.

When I told my daughter, she shrugged it off. At the moment, Disney Junior was more alluring and I called her away from the fun she was having with her sister. I felt strong and prepared for questions at that moment and she simply wasn’t interested. So, of course, her interest came the next day as we were rushing to host a play date.

After an attempt at a deep breath, I said, “It was a woman and she was white.”

“Why would they kill a white woman?”, she asked.

Knowing my daughter, the question was a technical one: Why would white people who don’t like “brown” people kill white people? I kept my response short and specific.

“When people hate because of something like the color of somebody else’s skin they often don’t care who they hurt.”

Sensing that was not the whole answer she needed, Marc chimed in and explained that the dead woman, Heather Heyer, had been a friend to brown and black people and that friends show up to stand against hate together.

This statement reflects a very important message we are instilling in our children: people aren’t friends if they don’t stand in solidarity. Raising two daughters we are a bit wary of “fake friendships.” Fake friends get you in trouble. They leave you at parties by yourself. They are quiet when racist statements are made. They are conditional and hurtful. For a 7 year-old, that is an important learning about both friendship and racism.

My goal as a parent is not to raise the most “woke” child in the world. It’s really not. I am trying to raise a daughter in a world that will try to strip her of her self-confidence and dignity because of her gender and race. I want to strengthen her and prepare for the road that lies ahead. I expect her to come back with more questions and that is o.k. I want to help her through any doubts or fears she has.

As her parents, I want us to use our awareness as adults to build her knowledge and resilience in a way that protects her without trying to shield her completely from the world.

As she grows, our conversations will be longer and richer. She will think critically, get angry and sometimes feel freedom. Someday she’ll know the world and the full ugliness of her society. She’ll know her parents’ small role in it. Sooner than I like to think, I hope she’ll fight with her whole heart for justice. To get her there, I must center her development above anything else.​

Nicole Lee, Esq., is an equity and inclusion trainer, leadership coach and mother. More about Nicole > 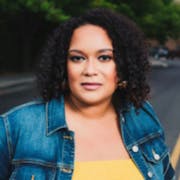