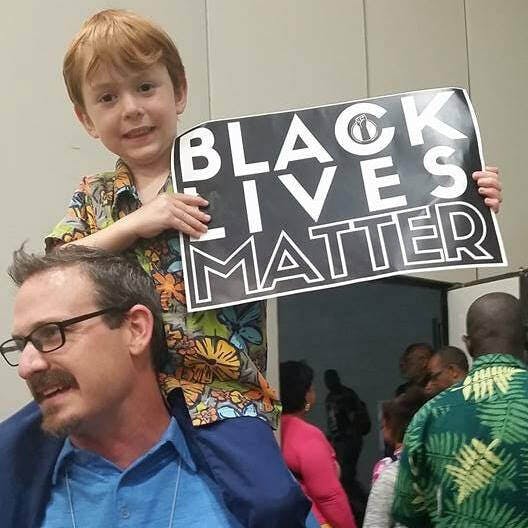 With my son, River, at a Black Lives Matter March

With my heart breaking throughout the day, learning more and more about ‪#‎KorrynGaines‬, the latest Black women, the 9th this year, murdered by the police, I began preparing for my kids’ bed time routines.
​
I sat in our rocking chair, feeding August, who is about to turn 1, and I kept running through the details: A SWAT team sent in to serve a warrant on someone with outstanding traffic violations. A confident, empowered Black woman who repeatedly documented her unjust racist encounters with law enforcement, as well as her spoken word poetry denouncing anti-Black racism. The police, fearing a repeat of a Facebook live stream of their actions, gets Facebook to deactivate her account, where she was posting videos about what was happening. Her recording, still up on Instagram, of her conversation with her 5 year old son, asking him why he thought the police were there, and his response, “to kill us”. And then they killed her, shooting and injuring her son as well.And now, with August asleep, it’s time to read my 5 year old, River, his night time books. I’m about to fall apart in tears, energy of sadness and anger rushing in my body. I grab the old-school, not exactly awesome, but something to jump off from, Harriet Tubman kid book we bought at a library sale.

“Yes,” I respond, and tell him about #KorrynGaines and her 5 year old son. I can see the sadness in him now too, and I say that this is why we work against racism, why we march for ‪#‎BlackLivesMatter‬, and why we celebrate Black women leaders like Harriet Tubman and the leaders today.

We talk about his Auntie Ash-Lee Henderson and how she helped bring about “A Vision for Black Lives” and is helping get it out all over the country and how it’s about all kids having good houses, schools, parks, playgrounds, and no racism against Black kids who too often get treated like they’re dangerous, like they’re bad, like they don’t deserve to be able to play, learn, and have fun, treated mean and hurtful, and sometimes killed by the police because right now Black people’s lives don’t matter as much as white people’s lives.

We talked about his Aunties Tufara Muhammad, Elandria Williams and his Angelmama Shannon Garth-Rhodes and how they are leaders in the Movement for Black Lives Matter and how his mom, Jardana Peacock, and white Aunties like Carla Wallace, Rahula Janowski, and Allyn Maxfield-Stelle are working against racism and for Black Lives Matter.

At one point as I was saying something about racism killing Black people, River started talking about how dinosaurs also could kill people. He went on the dinosaur train of thought for a few minutes, as it then turned into a whole thing about how sharks existed back with the dinosaurs and that they still exist and how cool is that.

And then he got quiet and reflective and said, “I don’t want Kenneth to die.” I’m crying just remembering that moment. Kenneth is River’s best friend from Pre-K, and Kenneth is a 5 year old Black boy. I said, “We don’t want racism to hurt Kenneth, anyone in his family, or any of the Black kids in your class or at your school, and that’s why we have the Black Lives Matter sign in our yard, that’s why we march against racism, that’s why we learn about Harriet Tubman, and that’s why we try our best to love people, work for peace and justice and no racism.”

We read the book and he was engaged, asking questions, and I asked him if he’d like to see pictures of Black women leaders tomorrow and he said yes.

As we laid in bed, during the “rest break”, when he actually falls asleep, I told him how proud I was of him, his loving heart and his smart mind, and that I loved being his dad. He often wants a little physical space from me going to sleep, but tonight, he snuggled up and I held him as he fell asleep.

Chris Crass is an educator, father and the author of Towards the “Other America”: Anti-Racist Resources for White People Taking Action for Black Lives Matter. He lives in Louisville, KY with his partner and their two sons. Learn more about his work at www.chriscrass.org. More about Chris > 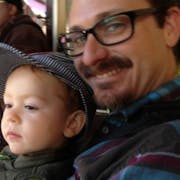