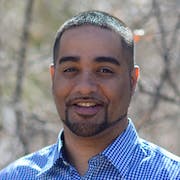 (opens in a new tab) iamaneducator.com/

Jesse Hagopian is an award-winning educator and a leading voice on issues of educational equity, the school-to-prison-pipeline, standardized testing, the Black Lives Matter at School movement, and social justice unionism. He is an editor for Rethinking Schools magazine, an author, public speaker, organizer, and Ethnic Studies teacher at Seattle’s Garfield High School – the site of the historic teacher boycott of the MAP test in 2013. Jesse is the co-editor of the books, Black Lives Matter at School and Teaching for Black Lives and is the editor of the book, More Than a Score: The New Uprising Against High-Stakes Testing. His writings have been published in numerous books and articles. Jesse’s education and social justice awards include the national “Secondary School Teacher of the Year” award and the “Courageous Leadership” award from the Academy of Education Arts and Sciences, the Abe Keller Foundation award for “Excellence and Innovation in Peace Education,” the Seattle/King County NAACP “Service to Community Award,” and he was named a “Cultural Freedom Fellow” by the Lannan Foundation for his nationally-recognized work in promoting critical thinking and opposing high-stakes testing. Jesse is a graduate of Seattle’s Garfield High School (where he currently teaches Ethnic Studies and is the co-adviser to the Black Student Union), Macalester College, and obtained his Master’s degree in teaching at the University of Washington. Jesse’s speaking and traveling are made possible by his wife, who takes on the responsibility for their two children when he is away.