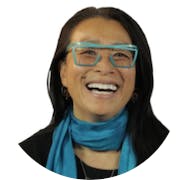 Villy had a crazy dream: to create a new kind of social enterprise that helps kids who, like her, grew up in the projects. Raised by an immigrant single mother in New York City, Villy’s desire to tell her story forged a passion for using the digital media arts to capture stories untold and to create social change. That’s why she founded BAYCAT, leveraging her impressive 25-year background in education, arts programming, nonprofit business and law. Villy received her double B.A. in Engineering and Economics from Brown University, J.D. degree from Northwestern University, and her teaching credential from San Francisco State University. Villy filmed and produced a short entitled, “Unplugged,” that was featured in the 2005 Marin Environmental Film Festival. She is also fluent in Mandarin.