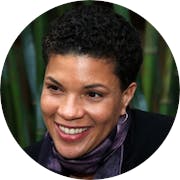 Michelle Alexander is a highly acclaimed civil rights lawyer, advocate, and legal scholar. In recent years, she has taught at a number of universities, including Stanford Law School, where she was an associate professor of law and directed the Civil Rights Clinics. In 2005, she won a Soros Justice Fellowship, which supported the writing of The New Jim Crow, and that same year she accepted a joint appointment at the Kirwan Institute for the Study of Race and Ethnicity and the Moritz College of Law at The Ohio State University.

Alexander is a graduate of Stanford Law School and Vanderbilt University. Following law school, she clerked for Justice Harry A. Blackmun on the United States Supreme Court, and for Chief Judge Abner Mikva on the United States Court of Appeals for the D.C. Circuit. She currently serves as a Senior Fellow at the Ford Foundation and devotes her time to writing books and articles, supporting advocacy organizations committed to building racial justice movements, and, most importantly, raising her three children -- the most challenging and rewarding job of all.