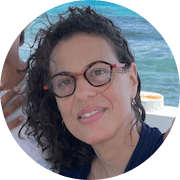 Melissa Giraud (she/her) ​is co-founder and co-director of ​EmbraceRace, where she leads efforts to support parents, educators and other caregivers to raise children who are thoughtful, informed and brave about race.

She has spent a lifetime trying to center the voices, experiences and concerns of children and families, with a particular interest in immigrant kids of color and first-generation children. She is the multiracial (Black/White) daughter of immigrants from Dominica and Quebec.

Professionally, Melissa has sought to empower marginalized kids and families, first as an elementary school educator teaching in a bilingual (Spanish/English) program in a predominantly Mexican and Mexican American neighborhood in Chicago, then as an NPR producer in DC driven to recruit voices and perspectives from communities of color in the newsroom, and later as a radio reporter who collaborated with her former elementary students as they were coming of age to capture the experience of living biculturally and transnationally for NPR. Melissa further pursued her interest in K-12 education and equity in graduate school and has been a consultant to numerous foundations and organizations, with special attention to the promise and perils of technology in advancing educational equity.

Melissa earned a BA in history from the University of Chicago and an MA in Education from The Ohio State University. For more of the details of Melissa’s professional work, check out her LinkedIn page here.

Melissa finds inspiration in the many children, families, educators and others who are finding ways to walk the walk of antiracism with more courage, joy and thoughtfulness everyday. She is honored to learn from them and very motivated to keep up with them! Not least of all, she is inspired by her partner in EmbraceRace and in life, Andrew Grant-Thomas, and their two children, Lola and Lena.