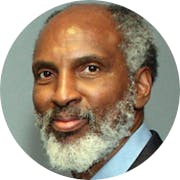 john a. powell is an internationally recognized expert in the areas of civil rights and civil liberties and a wide range of issues including race, structural racism, ethnicity, housing, poverty, and democracy. He is Professor of Law and Professor of African American Studies and Ethnic Studies, holds the Robert D. Haas Chancellor’s Chair in Equity and Inclusion, and directs the Haas Institute for a Fair and Inclusive Society, which supports research to generate specific prescriptions for changes in policy and practice that address disparities related to race, ethnicity, gender, sexual orientation, disability, and socioeconomics in California and nationwide. He was recently the Executive Director of the Kirwan Institute for the Study of Race and Ethnicity at The Ohio State University and held the Gregory H. Williams Chair in Civil Rights & Civil Liberties at the Moritz College of Law. Professor powell has written extensively on a number of issues including structural racism, racial justice and regionalism, racial and ethnic identity, spirituality and social justice, and the needs of citizens in a democratic society.