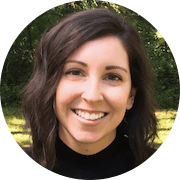 Christina Rucinski (she/her) is a White former educator and academic, serving as the Research-to-Practice Program Manager at EmbraceRace. In this role, she translates insights from scientific research to inform caregiver and educator practices to support healthy racial learning in young children.

Christina has worked with children for most of her life, including as an early childhood educator and in collaboration with the content research team at Sesame Workshop. She holds a PhD and MA in Applied Developmental Psychology from Fordham University and a BS in Psychology from Tufts University. As a developmental scientist, she has conducted research on children’s social-emotional learning, classroom racial and ethnic diversity, and teacher-student relationships across racial lines. She brings this evidence-based lens to her work with EmbraceRace, in translating from research to practice and back again.

Outside work, Christina is often watching and reading sci-fi, collaging, and birding with her partner. They currently live in western Massachusetts, on land stolen from the Nipmuc and Pocumtuc peoples.

For more details of Christina’s professional work, check out her LinkedIn and Google Scholar profiles.

“I sometimes visualize the ongoing cycle of racism as a moving walkway at the airport. Active racist behavior is equivalent to walking fast on the conveyor belt. The person engaged in active racist behavior has identified with the ideology of White supremacy and is moving with it. Passive racist behavior is equivalent to standing still on the walkway. No overt effort is being made, but the conveyor belt moves the bystanders along to the same destination as those who are actively walking. Some of the bystanders may feel the motion of the conveyor belt, see the active racists ahead of them, and choose to turn around, unwilling to go to the same destination as the White supremacists. But unless they are walking actively in the opposite direction at a speed faster than the conveyor belt—unless they are actively antiracist—they will find themselves carried along with the others.” -Dr. Beverly Daniel Tatum