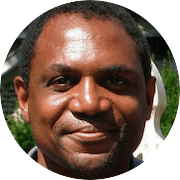 I’m a dad to Lola and Lena, a partner to Melissa, a son, a friend, a social justice worker and long-time racial justice guy, a black man of Jamaican origins in the United States, born on the 4th of July.

I have good friends, decent health, two lovely, healthy girls, a wonderful partner, and nice degrees from elite institutions. Most members of my immediate and extended families live solidly middle class lives at a time when fewer and fewer people can claim that. I’ve been able to do work meaningful to me for a long time and do it alongside good people whose examples inspire me.

With reference to all I’ve seen, learned, and experienced about the diverse ways people live their lives in the United States and elsewhere, I understand myself to be an enormously privileged human being. (The depth and breadth of my privilege was never more apparent than during my recovery from a serious illness a few years ago. I touch on that here.) In that respect, we have waaaay more than our “fair” share of people like me in these United States.

Knowing what I know, and the examples of people everywhere I look doing heroic work to push back against injustice, racial and otherwise, it would be obscene for me not to lend my effort to that struggle.

For some of the details of my professional work, check out my LinkedIn page.